I could swear that I’ve done a post on indulgences before. So sure was 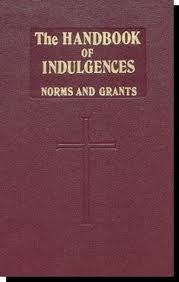 I that when someone asked to have a post on them I thought I even remembered the title of the post and was just going to link them to it. But I can’t find it and so . . .

The whole idea of indulgences stem from the fact that Jesus gave the keys of the kingdom of heaven to Peter and through Peter to the Church. “Whoever sins you forgive are forgiven, whoever sins you retain are retained.” There is not a whole lot of other explanation after that. It is like giving your kid $100. “I’m giving you the power to purchase things. I am not going to tell you how to use that $100, just that you have $100.” So nowhere, even in the thickest Bible, will you see instructions even for building a small chapel with a screen in it, a couple of seats, and a light on the outside that lets you know if it is occupied or not, in which we are to confess your sins. That is simply what the Church, according to the authority given her, decided to do with the keys.

This, of course, is not the only way that our sins can be forgiven. There are a number of ways though confession is the 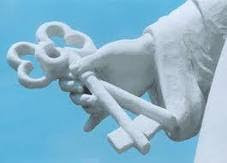 normative and most efficacious. Every time we celebrate a sacrament the forgiveness of sins is involved in some way which is why we have the penitential rite at the beginning of Mass.

Now, another way for sins to be forgiven is through indulgences, which, by the way, were never done away with in the Church. As a matter of fact in 1968 the “Handbook of Indulgences; Norms and Grants” was put out by the Apostolic Penitentiary and updated in the United States as late as 1988.

An indulgence is not an “easy way out.” In fact I find the practice of attempting to gain one FAR more daunting than going to confession. But let us take a look.

An indulgence brings about the remission of the temporal punishment for sins, and therefore the giving of satisfaction owed to God for one’s sin. An indulgence can either be plenary (when all punishment is satisfied) or partial (just as the name implies.) They can either be gained for oneself or for a soul in purgatory.

In order to gain an indulgence one must perform the action to which the indulgence is attached. For example, according the handbook, “A plenary indulgence is granted the Christian faithful . . .when they devoutly assist at a First Communion Mass.” (That means you come and truly pray the Mass with those who are receiving First Holy Communion.) But that is not all!

Though the rules on partial indulgences are rather lax, in order to receive the benefits of a plenary indulgence, “Besides the exclusion of all attachment to sin, even venial sin (!), the requirements for gaining a plenary indulgence are the performance of the indulged work and the fulfillment of three conditions, 1) sacramental confession, 2) Eucharistic communion, and 3) prayer for the pope’s intentions.” The idea behind this is that the gaining of a plenary indulgence assumes a full conversion to Christ on the part of the person trying for one. (After all – it supposes that you have feed yourself from an attachment to sin of any kind!) It is a radical decision for God. Which is why there is only one day in your life that it is possible for you to receive 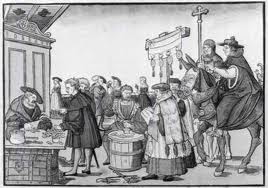 more than one plenary indulgence and that is on the day you die. You can receive partial indulgences as you please.

Can you see now why selling indulgences is so wrong? An indulgence and in fact even sacramental confession calls for a radical turning of one’s life to Christ for it to be efficacious. Dropping a penny in pot does not constitute this.
Here is online version of the Handbook on Indulgences.
Posted by Fr. V at 7:32:00 AM

You say that the Handbook of Indulgences is online . . . . that's about as far into cyberspace as it gets.

I usually love your explanations of things Father, but there's *many* ways of getting your sins forgiven and confession is just one of the ways?! How else do mortal sins get forgiven? I thought the penitential rite is just for venial sins.

And indulgences aren't a way to get sins forgiven. You have to be in a state of grace, i.e. have gone to confession, in order to even gain a *partial* indulgence.

I apologize for being so hard-headed about this but so many Catholics don't believe in the Sacrament of Confession any more and this blog post could be interpreted to make them think they're right...

Amen, Lynne and Anon.
I have a son who likes to argue that through the penitential rite his sins are forgiven so he doesn't need to go to confession.
I know you said confession is the normative but saying it isn't the only way gives those that don't like or want to go to confession something to interpret to say they are right. I was one of those for many years.
I don't mean to beat up on you, yours is the advice I trust more than most others.

The practice of indulgences has nothing to do with forgiveness of sins, only the temporal punishment they incur. How about a follow-up comment?