MONDAY DIARY: TAG SALE - YOU'RE IT!

Every once in a while there is an estate sale in our neighborhood. I like to go not because I need anything (because I don’t) but because I enjoy seeing the architecture of some of the houses around here. There was an interesting tag sale this past Saturday. As you 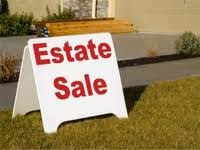 may be aware from reading this blog, about a year ago Saint Mary parish and St. Bernard parish combined to become St. Bernard – St. Mary Parish. Bringing these grand institutions together meant that there was some redundancy in “things” and so there was to be a tag sale at both rectories on Saturday.

Friday night I was at a bon-fire with a number of Akron priests when this was announced. Saturday was scheduled to be a busy day but there was some time later in the afternoon when I could sneak away. I wasn’ 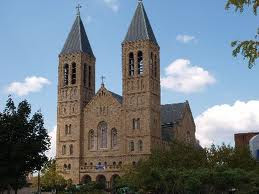 t so interested in “stuff” as I was to see the places anyway.

St. Bernard was my first stop. The rectory had obviously once been rather grand with wonderful woodwork, soaring ceilings, stained glass windows, and spacious rooms. Over time it became rather tired looking and much of the woodwork had been painted over and is now pealing. Random pieces of furniture filled the rooms. If you were going to buy a house, this would be the place you looked at and thought, “Wow! With some work (and cash) this could be a really nice place in which to live!”

Fortunately there was nothing I wanted to buy. That is always a danger in such places. The things that would have interested me were not for sale. They were selling were things one would find at most yard sales; incomplete sets of flatware, the odd glasses, a mismatched chair.

A quick drive out to the Saint Mary proved to be much the same wares. That rectory was in the school building. I had never been through much of the rectory. It seemed like it might be a bit trying at times and reminds me to be less critical of my living arrangements. Out the back door of the kitchen put you in the main hallway of the school. Could you imagine hearing all those feet and chairs scraping over your head all day long? 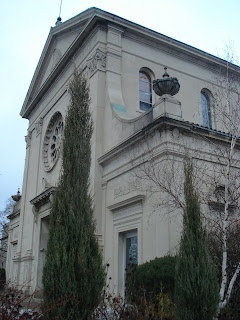 There were people there who used to be employed there and they put on a cheery face though I know it must have been difficult. It was for me when we broke up the family house after Grandma and Grandpa died. I remember getting the key from my Dad and just sitting in the house remembering everything that took place there. I have happy memories though I cannot go back. I made that mistake once and the people living there currently take very poor care of the house. The grand front porch is starting to fall off and the screen door is smashed. Fortunately these rectories seem as though they will be treated much better.

I went to my parish treasure sale last May and bought a beautiful old picture frame, with a chunk of gesso missing. It had been painted over with gold paint but on the back I could see residue of gold leaf. So beautiful. It's in the hands of someone who restores frames. When I get it back I'll hang it on the wall empty until I figure out what to do with it.

My word verification was brati, or brothers for those unfamiliar with Slovene.