MONDAY DIARY: HOW DID I DO THIS AGAIN?

I had to cancel my plans for Sunday night rather last minute. The other priests were out an about and it was just me and Sebastian. It was the weirdest thing. I looked at Sebastian and said to him, “We used to live here by ourselves. What did we do?” 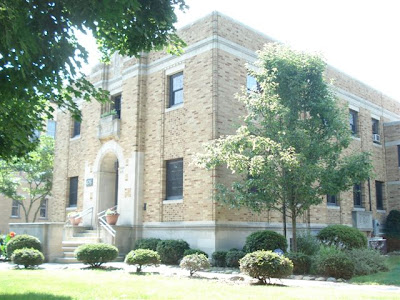 I used to not be very good at being alone - I found it lonely. It was a huge step for me to eat a Taco Bell all by myself. Now I crave it from time to time.

I don’t like television much. I try to watch it but become so agitated by the commercials – feelings of being manipulated voluntarily – that I can scarcely survive twenty minutes so that was out. Fortunately I live at a parish and there is no lack for things to do to keep you occupied even when everyone else is busy.

About a year ago my parochial vicar and I discovered that it would cause a fraction of what we would pay to join a club if we purchased used weight equipment and put it in the basement. So that was on top the list followed by a long bike ride down into valley, following the trail to downtown, and then weaving my way back to the parish through the parish boundaries of St. Vincent. 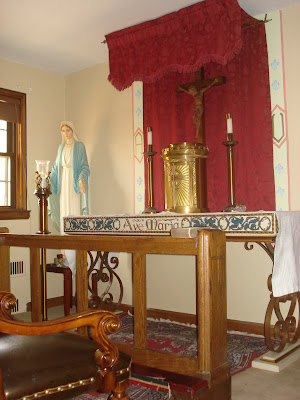 Back at the rectory I threw together a decent meal from pieces and parts of dinners from over the last week. Then Sebastian and I went to run through the school, I throwing his bouncy ball down the hall and him tearing after it. I gave up trying to play basketball in the gym with him because he just wants to pounce on the ball and deflate it.

Having run ourselves out we went into the Saint Joseph chapel in the rectory to do our evening prayers. The Saint Joseph Chapel may become the Lady Chapel since one of our priest friends donated a real altar for the room (the previous one being a metal table) and it has “Ave Maria” written across the front of it.

Then we settled down in the Chesterton Room with snacks, tunes, and some reading. It is one of the few rooms in the house where Sebastian is allowed up on the furniture. He puts one paw up, I touch him under the chin and he hops up, squeezing as closely as possible and falls asleep, paws moving frantically and ghost barks at an object in his dreams.

Passing through a few chapters in my book the CD starts to skip (I thought we were past that when we got rid of LPs) and instead of fixing it took Sebastian for his late night walk around the property. When we came back I started playing the piano, only intending to punch out a few notes but before I knew it the clock was banging away informing me that I had spent some considerable time at the keyboard – a very good thing since my skills are waning dramatically. By that time priests started coming back to the parish and so we did night prayer together and I went to bed having a full evening and happy that I remembered how to be by myself.

It used to be such an extremely rare thing at my last assignments – maybe only once or twice a year that I would have the house to myself and so on those rare occasions I would blast loud music and walk around in my pajamas not because I even liked doing such things, but like a teenager who does such things because his parents are on vacation, did so because for once I could!
Posted by Fr. V at 8:28:00 AM

Fr. V., Only you can turn a broken date into an enviable adventure.

What more does one need than a Chesterton Room?! ...Well maybe a Belloc Lounge across the hall!

"Back at the rectory I threw together a decent meal from pieces and parts of dinners from over the last week." How refreshing to find someone who enjoys 'leftovers'!