My first Thanksgiving at St. Sebastian I drove past Snyder Park,

the park one block west of the parish, on my way to the ecumenical service at St. Paul Episcopal. There were quite a few guys out walking their dogs on that brisk holiday morning and I remember thinking, “Now that looks like something enjoyable. I want to be one of those guys.”

Two years later I thought of that morning as I put Sebastian on his leash and started out for his walk. It was raining – hard – and cold and I laughed mirthlessly recalling that morning two Thanksgivings ago. Of course I was the only weirdo out there tromping through the mud and rain. But Sebastian was happy. At least I found my extra set of car keys that were in my raincoat pocket for the last six months.

Thanksgiving Day Mass is one of my favorite Masses of the year. It is well attended and the people who show up for this Mass seem to throw th 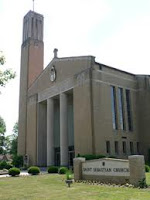 emselves into it a bit more than at just about any other Mass of the year.

This year, not only did we have our usual Thanksgiving Day Mass, we also hosted the community ecumenical prayer service. West Akron boasts the oldest, continual, ecumenical Thanksgiving prayer service in the State of Ohio. My first year here some of the other ministers were upset with me for not cancelling our Mass in lieu of this service and it was difficult for me to explain that we can’t just cancel a daily Mass even for something so worthy. This year it seemed there was an air of openness to our situation and graciously they allowed for a 15 time change in time in oder that it could be hosted at St. Sebastian. So after our Mass I invited our people to stay and then ran over to join the ministerial ecumenical breakfast already taking place in the rectory and being hosted by Fr. Pfeiffer.

The night before we worked with one of our parishioners who was taking a large part in making the breakfast possible. We took care of the mechanics, expanding the table, brining out chairs, setting up place settings and such and so. I had never been to one of these breakfasts because I was always saying Mass. Last year Fr. Pfeiffer attended for both of us and reported that it was a very simple breakfast. So we were going to run out and get bagels and 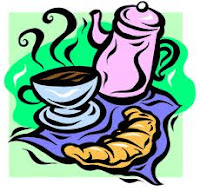 make coffee. What did we know?

“Oh, that won’t do,” warned one of our parishioners. “You are able to do more so you should do more!” (Here is one of the admitted drawbacks of having a celebate clergy - we don't have someone to say "The people you are inviting are not bachelors! Feed the right!) So we tried to pull something together with the help of a person who often cooks for us in jams such as this and were able to pull off a simple but very nice breakfast. I was sure glad to see it anyway coming back from the Mass and joining them at the dining room table.

o be quite honest, we get along well but there always seems (to me anyway) to be a little tension in the room. Nothing hostile, just a bit of unsurity as to how to get along - which is precisely the benefit of having this every year. The elephant in the room is that we all are representatives of theologies and philosophies that in many ways contradict each other and this context is not one in which we could (or should) get into even friendly debates. Our job at the moment was to get along and to offer thanks on behalf of the community for all the gifts we have received from our God. So the elephants are left tied up in the parking lot.

It is quite exciting actually to be part of this unique gathering of representatives of the area. My prayer is that it goes a long way in helping bring understanding between all of us. If we can eat and pray together there is hope that if we cannot agree theologically and philosophically on certain matters, we can at least show that we can get along just the same.
Posted by Fr. V at 8:37:00 AM

It sounds lovely. Having traveled for two weeks with all the wrong clergy, I understand what you mean about contradictory doctrine; the saving grace for me was the Orthodox priest as the two of us were most conservative in our outlook. Because I'm completely uncharitable I derived great amusement from the two Methodist women ministers and their attitude problem about religions that won't ordain women; they were very frustrated when they asked the Priest questions about Orthodoxy and got straight-up Orthodox doctrine in reply. My favorite moment was when one of them asked me when Mother Teresa would become a saint and I said she had to perform another miracle first. She said "after she's dead?" in a shocked voice, so I explained what little I know about the process that leads to Canonization.

I love Thanksgiving too!

BTW, respectfully - it's Schneider Park (because it is on Schneider Avenue), not Snyder. I don't mean to be a Know-It-All, but I'm a City of Akron Parks employee, and that's its real name.

Well, as one of your Protestant readers, I say: Yay for you all!

And also, I do think that theology triumphed here. For what is more a reflection of God's presence among us than a shared meal?

"Isn't the traditional Latin Mass said there?" So what's the punch line? And who do you want to punch, the Extraordinary Form Ministry or the folks putting on the breakfast? I think both sides need to get over it.

"the two Methodist women ministers and their attitude problem about religions that won't ordain women; they were very frustrated when they asked the Priest questions about Orthodoxy and got straight-up Orthodox doctrine in reply. My favorite moment was when one of them asked me when Mother Teresa would become a saint and I said she had to perform another miracle first. She said "after she's dead?" in a shocked voice"

Their reaction says a good deal about their theology. I'm always surprised by the lack of appreciation women have for the achievements of women relegious as if the only way to serve God is by being the person who says the sermon each Sunday.

I guess they didn't realize that there's a process and public acts are insufficient to determine whether someone has lead a virtuous life. I recently learned that when my pastor was in Rome he worked on her Cause! We just finished a bible study class and on the suggestions for other programming line, asked for a talk about that.

I'm sure the content is not public information but it would be interesting to know more about the process and what goes into it.

Yes, St. Sebastian has the Mass about which you are inquiring. Just as technical note - it is neither called the Latin Mass (any Mass may be said in Latin) and traditional can mean just about anything also depending on who you are talking to - just for example there will be those whe soon will be calling the current ordinary form of the Mass traditional since we will no longer being doing it starting advent of next year.

The proper term is the extraordinary from of the Mass. St. Sebastian has both forms, this particular one being done usually at 1:00 on Sundays with the priests varying between about 4 or 5 five priests.

Here'a a link for all who want to follow along with Father V http://www.sanctamissa.org/en/resources/books-1962/rituale-romanum/