the Greek alphabet. It has many uses in other religions as well as science but in Christianity has come to be a form of the Cross of Christ.

Sometimes it is called the “anticipatory cross” because in the Old Testament (Ezekiel 9:4) those who were mourning were told to mark their foreheads with this sign. Interestingly enough we do the same thing today on Ash Wednesday. So it is seen as an early echo of future events, a shadow of the Cross and the Passion to come though unknowingly. Thus is it often used in advent which we soon embark upon. 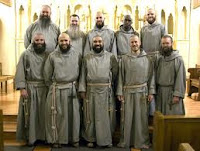 used this Cross in his ministry and so it also carried the name, “St. Anthony’s Cross,” but it is St. Francis that makes it so popular with us today. He adopted this Cross on his own personal coat of arms and from there it was adopted by the whole Franciscan order. St. Francis noted that when a monk spread out his arms, his habit formed this symbol and as such they were to where the Cross of Christ always in their ministry.

You may notice that many Franciscan rosaries have this Tau instead of a crucifix. One is to mark it as belonging to someone devoted to Christ through following the way of St. Fran 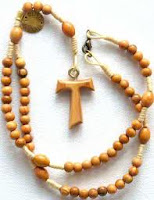 cis, the other, in part, is to picture oneself on the cross, dying to this world, joining your suffering to Christ, and looking forward to living with Him forever in heaven.
Posted by Fr. V at 8:48:00 AM

where do you come up with this stuff, Father Valencheck?

Father, When Mother Angelica was building the Shrine of the Most Blessed Sacrament [church] in Hanceville, AL, at the peak of the building was a cross. Lightning struck the cross during a storm one night and the top part fell off, leaving a perfect TAU.

Mother decided that it was a message from heaven and did not have the cross repaired. Mother Angelica's order of Poor Clares is Franciscan.