IF YOU HONK, LET IT BE WITHOUT SIN 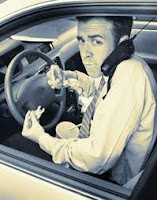 m Pittsburg to Akron. Talk about a commute! My commute is down the stairs in the morning. I suppose that allows me not to be so upset when driving (except by people driving erratically – I’m sure they do not think so – because they are on their cell phone) as some of my friends are who spend significantly more time behind the wheel than I do.

That being said I realized that I have relished in opportunities to honk my horn. I enjoy honking my horn but my father made it very clear that one only honks his horn when one absolutely needs to. So when someone is on their phone and doesn’t see the light has turned as quickly as I would like them to (because my life will be significantly different if I get through this light in two sends rather than one minute) I think to myself, “You have a right to honk your horn! Finally! It’s been months! Let them have it!”

ump trucks. Here is a link to the passage from the book. It is the only part of the book with which I am familiar so don’t think of this as a promotional for it. You will need to scroll down a bit to get to it. I thought it the most trite, inane thing I’d taken the time to read for a long time and erased it. (I had to search for it online to present it to you today.) But it kept bothering me and so revisited the whole idea that it presents.

Anger is not sinful – well – that is the emotion of anger is not sinful. “If you are angry, let it be without sin,” says Scripture. Emotions have no value on the sin/virtue scale. What we do with those emotions does however. There are times when anger for a just and holy cause should rouse passion and make one act for sake of righteousness. But even then we do not act out of the anger, the emotion that warned us that something might be wrong, but out of passion, compassion, and love to bring about good.

There is a traffic circle that is adjacent to our property. Occasionally there will someo

ne who feels offended by what the person in front of them has done (to them) and will lay on their horn directly behind the person for their trip around the circle. Not a little toot that says, “Ooops! I’m here” accompanied by a wave – but a glaring fifteen second death blast with accompanying orphaned finger. This happens once or twice a month. Yes, they were cut off, yes they were wronged, yes, they will have to take three more seconds of their lives to get around the circle, yes, the person in front of them did something dangerous, but now they also allowed themselves to become what they hate. They are the distraction going around the circle.

And what of the driver against whom they honketh their horns? Having observe this happen a couple of times I’ve seen older drivers now shook up, penitent drivers, and those w

ho are now equally mad right back. All that happens now is that driving conditions are now more perilous, and anger, like the flu in an elementary school in February spreading from person to person and being carried on out of the circle into the greater world. The garbage trucks fill up more and more and they will need to be dumped somewhere. Maybe around your dinner table tonight.

Garbage in – garbage out.

Don’t pick up garbage. Don’t give your garbage to someone else. Dispose of it properly.

Everyone will feel better.

Thanks Fr. V for taking out the garbage. This gives new meaning to "don't be a litter bug". For those who have not yet taken the 'garbage pledge' yet, keep in mind that curb service will be delayed a day for the Thanksgiving Holiday next week.

Bless me fr, for I have sinned. I honked tooooo long at someone who cut me off and was talking on a cell phone just so the person they were talking to would be annoyed and maybe go "Hey, let me let you get back to driving or something."
:0) Now that I have a soon to be driver, I need to watch the garbage...