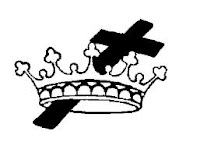 might seem simple and indeed most of the time it is. Found in stained glass windows, tapestries, and reliefs in many churches it not only represents the Passion of Jesus, but also his victory over the cross, the crown of thorns being substituted for the victor’s crown. He is Christ the King. He earned is hard won victory. “Bring forth the royal diadem,” goes the hymn, “and crown Him Lord of all!” 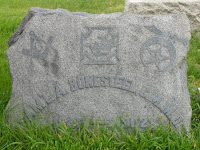 That being said, just because you see a cross and crown does not mean that what it marks has a connection to a Church or even Christianity so context is important. According to the site Seiyaku, “the symbol is not exclusively Christian - it is also used by the Freemasons, and from there became a logo for both the Christian Scientists and the Jehovah's Witnesses.”
Posted by Fr. V at 5:57:00 AM