TUESDAY QUOTE OF THE WEEK CLXLIX

FINDING TRUTH WHEREVER IT MAY BE FOUND: “Contrary to 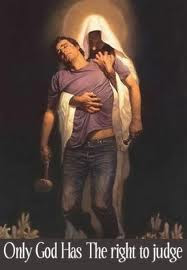 John, Jesus seems to have understood that they only real and lasting contrition occurs, not when one is confronted with one’s sins, but when one experiences the gust of grace that makes a loving and forgiving God plausible.” from Gil Baily’s, “Violence Unveiled”

QUOTE II: “If therapy does not help you feel better we think it’s not working. In Naikan the purpose is not to make you feel better, it’s to help you see the truth of your life. Seeing the truth of your life may initially make you feel terrible, but if you are committed to truth, then the question of how you feel is not the main issue.” Gregg Krech (Note: I do not endorse “Naikan” but would substitute for it “Christianity” and think it a worthwhile quote.)

As to last weeks comment about my interview on Louiseville Catholic radio WCLR 1040, I found my note as to when it will be aired. It will air at 8:30AM this Friday the 19th. Of course you can listen to it over the Internet when it is archived. The show is called "His Father's Apprentice" with Andy Mangione. The topic for the program will be, "Men as Spiritual Leaders of the Family"

Dr. Chad Engelland proves that Google does indeed have a sense of humor in his last (excellent) article in the Cleveland Universe Bulletin. If you go to a Google search engine and type in the question, "The answer to the ultimate question of life the universe and everything," it will give you an answer before listing sources to look elsewhere.

Patrick writes in, "This is just a reminder for the Newman Conference this Wednesday and Thursday at the University of Akron. For more information look here. 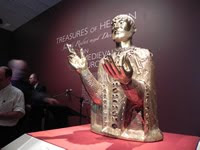 The Diocese of Cleveland Enewsletter reports, "The Reliquary Bust of St. Baudime was unveil Monday, November 8 at a 2:30 p.m. media conference held at the Cleveland Museum of Art. The bust will be on display as one of the focal pieces of art in the Treasures of Heaven: Saints, Relics and Devotion in Medieval Europe exhibit open now through January 17, 2011." or more information look here.

Matt writes in, "A Spanish newspaper had some great shots of the interior of the Sagrada Familia when the Pope was there." This is what he is talking about.
Posted by Fr. V at 7:29:00 AM

who is Andy Mangione ? what are his credentials ?

I thought that it was a reliquary of St Boniface, not St Baudime . . . who is St Baudime ?