YOU ARE MORE INTERESTING THAN YOU THINK

Almost every job has a certain mystique about it. Chances are that if you are in the middle of it, it all seems rather boring. But to others there is a certain amount of wonder. What goes on in those places that we cannot go? What is behind the curtain? What is it like down in the coal mine? What is it like in the restricted area, in the closed meeting, out in the field, using that machinery, meeting those people, being in such a frightening position, witnessing the event, knowing the inside information, having the skill, understanding how the system really works? (This part of my ongoing conviction that people are far more fascinating than they think they are.)

Today I thought I’d start sharing some of the places that being a priest has taken me. Just some little stories that you might find interesting.

Early in my priesthood (when, as you will see I still had some hair) I was afforded the opportunity to go to Rome. It was 1999 and so everything was pretty much under scaffolding. Msgr. (at the time) Broglio, a priest of the Diocese of Cleveland, was working at the Vatican. Always hospitable to those visiting from the diocese he took me out to eat. It was quite late at night (even by European standards) and he asked at the end of the meal if I would like to have mass with the pope in the morning. Um. Sure. Let me check my schedule. Look at that! All clear.

I was to be at the brass doors early in the morning with my blue ticket (actually, not too many hours from the time of the asking.) Passing through he bronze doors I was saluted by the Swiss Guard. For a priest, the halberd is just sort of tilted out to the side and then back. By the time you are a cardinal they are swinging the thing all over the place. (I exaggerate a little.)

In a room just inside was a group of people waiting to go up to the pope’s private chapel. They were from all over the world and from all walks of life. There was one loud couple there that asked where I was from. When I said, “Cleveland,” they replied, “Oh, you must know Tony!” I had no idea about whom they were speaking until it became clear they meant Bishop Pilla. “Oh, and A. J., you must know him!” “Do you mean bishop Quinn?” “Oh yes, and Eddie.” “Do you mean His Excellency Bishop Edward Pevec?” And so went the conversation. * sigh *

Soon someone came for us and ushered us about the papal palace and up to the third floor. How many world leaders came with major concerns and peasants with petitions over the centuries? It was awing to imagine them.

The lay people were escorted into one room and the priests into another so that we could vest. Then we were escorted into the chapel. (That’s me just to the left of the Paschal candle.) John Paul was already there kneeling on his priedieu. Inside the priedieu were pieces of paper and it was said that these were the petitions that he wanted to remember at this mass. It was amazing to be so close to this man who changed the face of nations, the vicar of Christ, leader of the Catholic world, yet one of the most met and seen persons in history.

His secretary came in and helped him vest and mass began (in Latin facing east.) There was a small choir of nuns in the back that sang in Latin and Polish, surprisingly not all that well, but the mass was electrifying.

After, we were afforded time to pray and then we departed, John Paul still kneeling in prayer. After taking our vestments off, all of us were gathered into a library and we stood in line as John Paul entered and greeted each one of us personally. Some had business with him, some merely offered greetings. When he came to me I knelt and kissed his ring. His secretary said, “Father John 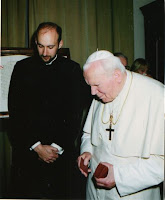 Valencheck from the Diocese of Cleveland.” John Paul said, “Ah! Cleveland!” My response is a source of embarrassment to this day. It only happened to me one other time and that was when I met a black bear in the woods in up-state New York. I said, “abadabbabibble.” He handed me a rosary and a blessing. Wow. I could think of a billion things most people would think of as more important for him to be doing at that moment. But he took that time out for me. It still gives me chills. I still don’t completely comprehend it. (On top of that, how many world leaders would take that much time to pray for their people and the world in the first place?)

Ah well, anyway, to finish the story, we were walking down a marble staircase about as wide as the house in which I now live and I was escorting a lady who wrote a stations of the cross booklet and brought for John Paul to bless. The couple about which I spoke at the beginning of this already too long story were behind us again speaking loudly about what clever things they said to the pope. When we got to the turn of the stairs, there was a landing with giant double doors. They seemed to magically open as we approached revealing Msgr. Broglio. “Fr. Valencheck,” he said, “It seems you left your umbrella last night.” “Why thank you Monsignor.” “Not at all. Shall we see you for dinner tonight?” “I should be most honored.” And with that he stepped back, the doors seemed to close on their own and the couple behind us snorted and would not speak in my presence any longer. (There’s proof for God right there.)
I thank God still for that day. What a blessing. And the best part of it all is that I was not unique. What a man. (Perhaps soon, what a saint!)
Posted by Fr. V at 9:42:00 AM

ROFL! I think I may've hurt myself reading this, but thank you.

With love in Christ,
Carol

So, you've walked those marble floors, eh? ... second cousins, I suspect, to those streets of gold we hear about in some circles. And how was Karol that day? Was Joe around anywhere to be seen? You know, Joe's birthday is next Monday April 16.

Forgive my familiarity, but they're all my brothers, you know.

HA! I was sitting here going Joe? Joe who? Who was named Joe that I should be aware of! HAHAHA!

By the by, what is ROFL?

Hilarious, and exactly what I would do! I met Maya Angelou once - I was doing plainclothes security through the local PD that night so we were some of the very few people able to meet her. Apparently she liked to thank those in person who assisted during her speaking engagements. She paid me a compliment and I said something completely inane.

I think if the Pope ever spoke to me I'd likely just fall over.

You're right about what other people perceive as "interesting". My own career path has taken me places most people never get to see, but think they do. The glamour which appears to be there thanks to TV is simply absent. Having a front row seat to tragedies and such isn't so "interesting" as it is stressful, and sometimes, life-changing (and not for the better.)

Rolling on the floor Laughing.

The line that said:

"My own career path has taken me places most people never get to see, but think they do. "

...is missing a huge chunk and makes no sense. I meant to reference places/things people THINK they want to see, but if they did see it, they'd be bored.

How did I manage to mangle that so badly? :-)


Oh, and "ROFL" Is "Rolling on the floor laughing"

You may see "roflol" (laughing out loud)

Well, once in a long ago Catholic chat room, someone typo'd ROFL as KOFL, and he quickly covered it, "Hey, we're Catholics --I was Kneeling On the Floor Laughing."

With or without hair, Fr. V., you're beautiful-- you remind me of the Poverello, and I am so glad you got to see Karol. :-)

Adoro - I just kept reading that line over and over thinking, "I'm sure it makes sense - I just need to think about it." :-)

Thanks for the code breakers. Rememinds me of people writing in yearbooks in high school (which I also didn't understand.) ARMCIRY Oh well.