THE SUNNY SIDE OF THE ALPS 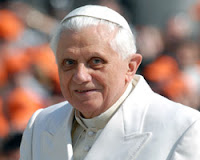 Here is one last installment (for now) of “Oh, The Places You’ll Go.”

Right after ordination it is custom in these parts to take a trip before beginning your first assignment. My trip was to a tiny little town named Jurisce nestled in the Alps of Slovenija where my family originated and where there is still an assortment of cousins. We were to have a mass of thanksgiving in the church where my family h

ad worshipped for as far back as anyone can remember.

t, on Corpus Christi (which in the local diocese I believe was celebrated on a Thursday) we went to the national shrine of Marija Pomagaj (Mary Our Help) in Brezne. Pope John Paul had visited there and there is a rather nice bronze statue of him there commemorating the event. Anyway, there was to be a great procession with the Blessed Sacrament but unfortunately there was a horrendous rainstorm that day and all the festivities were cancelled.

We were kneeling quietly and praying in the beautiful church when a man came up and tapped me on the shoulder. My Uncle had told him that I was newly ordained and he was quite excited to have me say a mass on the altar of the national shrine. (Once again, it took all of about half a second for me to check my social calendar before saying yes.)

Back in the sacristy they introduced me to the sacristan who could speak English rather well and she set me up for mass. I told her I was from Cleveland. She ran to the phone and called some people who came running down to meet me. They were a little disappointed. They were visiting from Australia. They thought I said “Queen’s Land.”

There were quite a few pilgrims present and it was a nice, quite, prayerful mass. Afterwards the sacristan had me sign a special guest book. I had a page all to myself. She flipped one page back and there was a name scribbled which was described as “Head of the CIA.” A few m

Sunday we had mass at the family parish. As you can see it is a tiny little place, but beautiful. I remember walking in and seeing the year of construction above the door and thinking, “Wow, this place is older than my country.” Inside were more family from the U.S. whom we were not exp

ecting. It was all quite overwhelming.

The mass was a mixture of Latin, English, and Slovenian. At the end, a young lady gave a presentation written by my cousin Andre and then they presented me with a

painting of St. Jurij (Saint George whom I took on as a patron of my priesthood) and copies of the church records for the family going back to 1828. The choir sang beautifully. When they began they took my breath away as they sounded just like the choir did in my home parish when I was growing up, a sound long since lost.

The parish priest generously handed me first mass prayer cards which he had printed up to pass out and they had my mother and I sing Marija Pomagaj before the whole group of us processed over to the new gastilna for a banquet, music, pictures, and bolinca (known to most people as bocce.)

It is funny, you never know exactly where God will lead you, but it is always interesting if you are open to following.

Wow, what an experience! Thank you for sharing it with us

How lucky you are. What a fantastic and moving experience. Thanks for sharing.

And now I know why you read my blog...because I have an icon of St. George posted on the sidebar. See...St. George knows his spiritual children...