WHAT ARE YOU TRYING TO TELL ME?

For years I have taught a class on symbolism. When invited to a parish I generally begin by spending time trying to locate and interpret all of the symbols used in a particular church building, develop a booklet for them, and at the end of the class offer tours of their church unlocking the many secrets these grand buildings contain. Some are easier than others.

By and large, Saint Clare is pretty straightforward. The majority of the symbols used in the building are in the stained glass windows. The Phillips’ Stained Glass Studio created the windows for the parish beginning in the 1960’s. In this commission Douglas Phillips, a native Clevelander, used traditional Christian symbolism. However, some things are just plain difficult to symbolize and I would have had no idea what some of the windows represented if Mr. Phillips’ widow who is still in the business had not been so kind as allow us to see the original plans that gave the title of each window. But nowhere was there a key explaining what the symbols themselves are.

Some are pretty straightforward and clever. 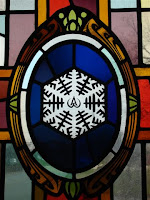 1. This window in a set of eight representing the Beatitudes is, “Happy Are the Pure of Heart for They Shall See God.” The snowflake comes from Psalm 51:9, “Cleanse me of my sin with hyssop, Oh wash me and shall be whiter than snow.” In the heart of the snowflake is the alpha and omega symbol that represents Jesus. The pure of heart are the sinless who see God. Clever.


Some after you are told what they are you think, “Well, of course that is what it is.” See if you can guess what these are before you read the caption. 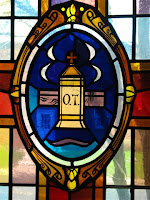 2. From the corporal works of mercy here is “Bury the Dead.” The object in the background is a coffin and I believe the object in the foreground is an oil stock for the anointing of the sick. It looks like the inscription reads “O.T.” but I think that it is supposed to be “O.I.” for Oleum Infirmorum (Unless someone can enlighten to what O.T. would be!) 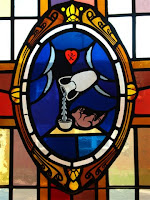 3. The title of this is not so difficult as is identifying the object in the background. This is “Give Drink to the Thirsty.” But why does there seem to be a skinned animal carcass in the background? On one of the tours someone finally identified it. If you are not so clever like me, be prepared to slap the palm of your hand against your forehead. It is a wineskin.

These last three examples I can tell you the titles of the windows but other than that I have no idea what the objects are supposed to represent. If you can figure it out I would appreciate hearing from you. The first two come from a set of windows depicting the four cardinal virtues. 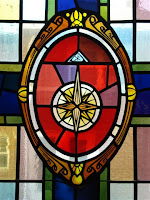 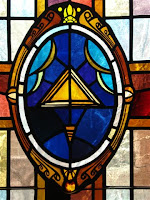 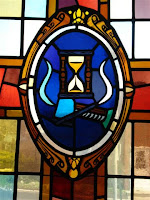 6. This, from the Corporal Works of Mercy, is, “To Bear Wrongs Patiently.” Well, the hourglass is pretty obvious but what is with the rake? An instrument of torture?

Lastly, the answer to yesterday’s question about the Mary and Joseph shrine. It isn’t a horrible thing, just confusing and incredibly annoying to those who are in the know and sensitive to such things. After Vatican II when renovations were made to the church, the Saint Joseph Shrine was destroyed to make a “chapel” for the Blessed Sacrament. Having a statue on their hands they plopped it down next to the statue of Mary and declared it a Holy Family Shrine as many parishes were want to do. Unfortunately the symbolism, posture, and title of the Mary statue tell us that this is a depiction of Our Lady of Sorrows. She gains this title during the passion of her Son. That means Saint Joseph is long dead. These statues should not appear together unless we are saying that she is having a vision of her departed husband in her grief . . .(?!)
Posted by Fr. V at 1:22:00 PM

For the prudence one, perhaps the glass pieces' colors themselves are to signify: one must stay to the right of human passion (the purple piece isdecidedly on the left), and one ought to exercise prudence with an eye on Mary's example (the little blue piece is higher).

Temperance, well, it's hard to see what that little thing is, but with the symbol of the Trinity above, we can see the little thing as "me" made in God's image and likeness, but small and well under God.. and needing to look up to see the Trinity's example of Perfect balance in love.

As for the rake in "Bear Wrongs Patiently," we will reap what we sow.. and dragging a rake along, we can plant not crookedly.. or, if we sow patience in bearing wrongs, it will grow into somethng good to feed all.. Otherwise, if we sow only a crappy response to wrongs, we'll end up with those horn thingies -- perhaps they are weeds. At the end of time, the Omega will reveal/release all from buried earth.. He'll not need a rake, tho'-- except maybe for Tarantino and fans. I dunno.

I love looking at stained glass windows in church and at their Stations and all. Even the designs in pew-ends are fascinating. And in Ireland there are inlaid tiles formed into butterflies..

Wonderfully unique and thought-provoking, all of this -- thank you.

nice. just "OK"
but TO TIGHT!!!!! it dosent " breath"
no soul in any of it.
very SAFE to look at
. but then again not everything can be " bells and whistles" huh??
its all illusion anyway!!

The symbol for prudence looks like a cardinal rose, a thing that tells directions. Perhaps prudence helps us go in the right direction? I can't really figure out what the symbol is on the blue triangle.

I've been in small towns or poor inner-city parishes most of my life so I haven't had the chance to look at cathedrals much. I will be more curious when I do get a chance. I had only thought of the beauty (or lack of it) in church art, not symbolism.

This past weekend, the Catholic Center of the Diocese of Memphis was forcefully entered, vandalized and burglarized.

The intrusion was discovered when employees entered the building on Monday morning. The burglary and vandalism is under investigation by the Memphis City police.

While in the building, the intruders desecrated the Blessed Sacrament, which is kept locked in a tabernacle in the Catholic Center’s chapel. Once a chapel is profaned, according to the Church’s Canon Law, it must be reconsecrated before being used again. Plans are underway for Bishop J. Terry Steib, S.V.D. to reconsecrate the chapel.

"It broke my heart to know that someone desecrated our precious Jesus by taking Him out of the tabernacle and throwing Him on the floor," said Mary Pat Van Epps, Director of Natural Family Planning for the diocese. "We all feel violated by this terrible act. They stole things and trashed our offices, but this will not stop us from doing our ministry and serving the people of West Tennessee. We ask God to bless the people responsible and to help them be accountable for their actions."

The list is not complete at this time, but the following items are known to have been stolen from the Catholic Center: two cameras, four portable computers and a small amount of petty cash.

The intruders invaded nearly every office at the center and went through desks, filing cabinets, disturbing files and paperwork and throwing things to the floor. Statues and personal items were broken. Nearly every doorknob in the building was smashed.

"In their search for something valuable, it is clear that the intruders trashed the offices they were searching; papers and other objects were strewn everywhere," Father John Geaney, C.S.P. noted. Geaney is the spokesperson for the Diocese of Memphis.

Once allowed into their offices by the police, employees spent Monday afternoon cleaning up and trying to return to work.

"The building has now been completely cleaned up and the services that normally flow from the building on a daily basis are continuing," said Father Geaney.

"While the Catholic Center is merely a building," said Dr. Mary McDonald, Secretary of Catholic Schools, "it is like home for those of us who carry out the work of Christ for the Diocese of Memphis through various ministries. While it is disconcerting to know that our home has been violated, our spirit is intact and our ministries will continue."

The Catholic Center is operated by the Diocese of Memphis and acts as the nerve center for services to people all across West Tennessee. The building on Shelby Oaks Drive houses the Bishop’s office, and those who minister with him, as well as the offices of education, tribunal, archives, pastoral services, development, technical services and finance.

And down we go into the depths of the ugly side of humanity.

Father, speaking of symbolism, perhaps you can explain why the Cleveland Diocese still flies the Rainbow Gay Pride Sash on its website. And what do the pink triangles symbolize?

I guess the bishop is just like the old guy.

Here is what Cardinal Arinze had to say about Rainbow Sashes:

The Vatican Cardinal responded, “No, no. You see, let's get it clear. These rainbow sash people, are they really saying we are homosexuals, we intend to remain so and we want to receive Holy Communion. The question arises; take the Catechism of the Catholic Church. It says it is not condemning a person for having homosexual tendency. We don't condemn anybody for that. But a person stands condemned for acting on it.”

Fr. V., was this part of the project you mentioned you were thinking of doing? Very necessary!

I like the windows...symbols are powerful in their simplicity, but sometimes it helps to know what they are. How ironic!

About the St. Joseph shrines and making room for the sacrament.... I've been pondering St. Joseph a bit as a layperson. I would appreciate some more knowledgeable feedback on my musings on St. Joe. I don't do very well parising in html tags, so here's teh link:

BTEG - I think you might be on to something. Thank you!

U.J. Same thing happened in my hometown about five years ago. The hosts were found outside. THe tabernacle had to be retired and was buried in a non-dislcosed vault at one of our Catholic cemetaries.

The man who did it was caught. He was at a bar drinking out of one of the ciborium. * sigh *

Adoro - Yes. Perhaps I'll actually get started on it soon. I've all the information from the class I taught. It is just a matter of reformating it (and having the time and gumption!)

Cath. Cleve. I understand your frustration. I think tomorrow's post will help (If I don't get distracted.)