HEY! I'M TALKING TO YOU HERE! 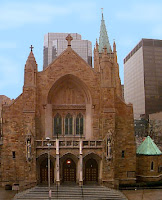 Considering that we live at the beginning of the third millennia and could have things quite bad architecturally, I feel rather fortunate to have the cathedral building that we do in the Diocese of Cleveland. Yet something about Saint John’s always made feel a bit uncomfortable and for the longest time I could not put my finger on exactly what that something was.

It finally became clear to me about ten years ago. I was singing in the choir in the loft for ordination. The organ pipes block the view for the choir and so if you want to see the goings on when you are not singing, you have to turn and look at a mirror positioned on the back wall. It is a long mirror horizontal with the floor. The view that it affords revealed what had caused my sense of tension with the building. You can experience what I did with the picture below. (It works much better in person but since you can’t all come here this will have to do.) 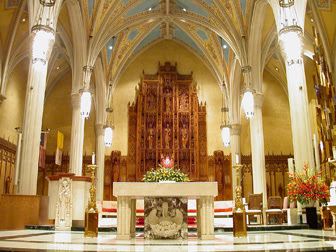 This happens in many church buildings because in many ways we are trying to look like one thing while in reality implementing another. At St. John’s, the top half of the picture suggests the symbolism of the mass in a much different way than the bottom half. What does the top half of the picture suggest? The people and the priest face (liturgical and in this case actual) east (toward the sun/Son) like Moses leading the people through the desert to the Promised Land. It is through Jesus by the power of the Holy Spirit that we are led to the Father in heaven represented by the angles and the saints in the reredos.

The bottom half of the picture suggests the symbolism in a different way. The priest is not in a “leader of the procession” position but has turned and is in a “teacher” or confronting position. The action does not at first seem to lead beyond the particular group of people to something beyond however our theology of the mass (at least officially) has not changed. Every prayer is still being directed to the Father in heaven through the Son by the power of the Holy Spirit on behalf of the Body of Christ.

Now, my opinion on which way a priest should face and five dollars will get you a cup of coffee and a biscotti. However, I will say this: It is far more challenging to properly symbolize what is happening at the mass with the priest facing the people as opposed to facing the same way as the people and so it will take a great amount of care on the part of pastors and ministers and catechists and parents and even worshippers to instruct, understand, and (especially on the part of priests) to properly use bodily symbolism to get across the true aim and nature of the mass.

The biggest obstacle to overcome is the idea that, although the priest is facing the congregation, he by and large is not addressing them. Many priests make eye contact with the congregation as they pray the words in the Sacramentary. Tabernacles were moved out of our churches because we were told by liturgists that is was confusing for the people. This is far more confusing. For years as a younger person I thought that I was being addressed (video example) rather than having the understanding that this was my privileged overhearing of the prayers being offered to the Father, “On the night He was betrayed . . .” (Perhaps that plays a part in my ego.) Yet there are parts addressed to the Father, parts addressed to the Body of Christ and parts to Jesus. That was clearer formally. If you were being addressed the priest turned toward you, if God, toward the East. Now, by our use of our eyes, our voice, and the position of our bodies we need to convey the same thing. It is much more difficult but absolutely necessary.

And it is also dangerous for the priest to over emphasize celebrating so that “people can see what is going on.” Taking that effort to the extreme leads to glass chalices and ciboria in order to make it easier for “the people” to see. Do you know what there is to see? Nothing. When the bread and wine turn into the body and blood, soul and divinity of Jesus Christ, it will still look exactly the same. We are to look with the eyes of faith. We don’t need to see Him other than when we are afforded those short opportunities at the mass to give him worship and praise. To exaggerate “seeing,” is to divert attention away from what it is we are called to do and believe at the mass. This too is confusing. We walk by faith, not by sight and our symbols, actions, and gestures must reflect this.

If churches are to be “catechisms in stone,” great care must be used when messing with the symbolism during remolding. Below is an example. What is wrong with this shrine symbolically? The answer tomorrow. 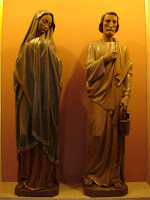 St. Joseph should be on Mary's right, not her left. Her head seems to be tilted towards him, placing her in a position of subservience to Joseph. That's all wrong. Was that it? Or more? Or something else?

Adoro - I think you AND I got it right on Joseph - but we'll have to wait and see. And what, pray tell, is a biscotti?

Father V - I think what you describe is correct - in a perfect world where everyone comes properly catechized and disposed to what is going on. That, I believe, is not the case for more than 50% of those in the pew ... as a result, they are more in the mode of 'being taught', every week. Someday something about what is going on and an understanding of their role in it might dawn in their now newly enlightened consciousness.

That will be the day when they say, "Oh! I think what I see doesn't make good sense with what I understand."

Then your students can redesign our worhsip space and the liturgists can revise the GIRM yet one more time, and maybe get it right!

Rob, I never got around to telling you that I found your response to the commion post hysterical. I was thinking of the pictures and laughing for hours. (I am easily amused.)

I wouldn't be surprised that you've been to the Toledo OH Cathedral, but even if you have, check out their site and take a virtual tour

One of my favorite Cathedrals in the whole USA.

Unclie Jim - I actually saw it once. A priest friend and I go on architectual safaris every couple of years. I was awed by this place! What a gem.

Biscotti is a hard bread with nuts that is good for dipping in your coffee if you are so inclined to such things.

Being a lay person, and possibly over simplifying, I think we need to remember part of celebrating mass is doing it in community not privately. Being in community with everyone else is very uplifting to me. We also must remember that after hearing the Word we have a responsibility to go out and spread that Word to others. Mass should be something that transforms us so that our words and actions in the course of our day may be able to bring someone else closer to God.

I went to Mass last night and couldn't help but think of this post. Suddenly it was driving me CRAZY that the altar was facing us!

I'm never going to be able to undo this...here I go, further into traditionalist leanings.....

Took your tour Fr. It wouldn't be fair to answer. I wouldn't want to color the others' guesses.

Ah, I love the Byzantine Liturgy, where the priest still faces East.