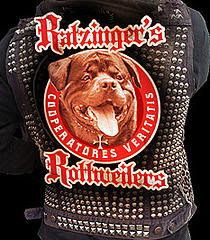 Was it not fascinating to see how something meant as a compliment could be construed as a negative and so put those who meant only to be complimentary on the defensive? Such was the case over the last day in the comment section after a simile was used between the pope and a German shepherd. Once a term is thus attacked, the choice for the user is either to distance himself from such a statement (and perhaps the idea behind it) or to defend it as perfectly fine despite the brouhaha that may ensue.

A similar instance has taken place on a large scale over the word (and the concept behind) dogma. Poor creature! The once proud and noble beast has fallen into disfavor in many circles and been chased to kennel where it need not bother anyone. It is a sad state of affairs since dogma is not a bad beast at all despite the protestations of those who are allergic to its dander. That some may be allergic to her in no way makes her not useful even to the very ones that have a dislike for her.

In last Sunday’s NY Times Magazine article on Pope Benedict the XVI it stated that for him growing up, “’Dogma’ was not a dirty word – it was the ground. ‘Dogma’ was conceived not as an external shackle but as the living source that made knowledge of truth possible in the first place.” It is the very means by which man can advance in understanding and truth for if we must begin over again with every person in every generation, we will never move forward. If every man must reinvent the wheel in his own time, we will never have bicycles.

In the “Screwtape Letters” by C. S. Lewis, a senior tormentor writes to his nephew, “Since we cannot deceive the whole human race all the time, it is most important thus to cut

every generation off from all others for where leaning makes for free commerce between the ages, there is always the danger the charictoristic error of one will be corrected by the charictoristic truth of another. But thanks be to our father and the historical point of view, great scholars are as little nourished by the past as the most ignorant mechanic who holds that history is bunk. Your affectionate Uncle, Screwtape.”

Dogma is another name for discovered truth. That others find that idea appalling or a detriment to their freedom is a non-issue. Allow such to reinvent the wheel if they so choose. But true freedom is to venture from this lofty point ever further into truth built upon revelation and the mighty shoulders of the great minds that have been before us. Do not be afraid or ashamed of dogma. It is a serviceable beast!

John W. Dixon Jr. says, “Christians stubbornly clung to their language even when it could be said that they really didn’t understand it. (And the sad thing is that, now when we are about to acquire the intellectual means for understand the terminology, a failure of nerve has set in and many Christians are abandoning the terminology.)”

But it need not be that way.

IN OTHER NEWS
“Into Great Silence” opens this week at the Cedar Lee. (I hope it is as good as all of the hype it has been receiving. I’ll be there this Friday at the 7:45 showing. See you there!
Posted by Fr. V at 2:31:00 PM

see what happens to us when you're gone. welcome home. and you thought this web-log would never amount to very much ... musings of a parish priest, indeed. that's why they call you 'Father V'.

I hope you enjoy Into Great Silence. I saw it here in Chicago on the Monday of Holy Week and it was AMAZING.

I ordered the DVD this week. I can't wait.

I didn't get a chance to go see the movie when it was in our area...I'm going to have to order the DVD myself.

adoro te devote -
I don't remember from your post comments here at Adam's Ale if you read Dawn Eden's posts at all - but based on the "bio" at your site, I think you'll find her post on Wednesday 4/11 very interesting indeed - on moral relativism ... her experience

I do read Dawn Eden, but I haven't visited in awhile. Thanks for the link! It's always amazing to me what brings people out of their relativist leanings.