FRIDAY POTPOURRI: PARISH HISTORY: HOW MUCH WOOD COULD A WOODCHUCK CHUCK?

One of the hallmarks of Fr. Byrider’s tenure as pastor was his thoughtfulness and kindness.  Known to his intimates as “Chuck,” there was an expression bandied about amongst the priests of the diocese about the well thought of pastor.  Fr. Byrider made it a habit to keep an eye out in the news for any mention of one of his brother priests.  If he spotted a story about you, you would receive a congratulatory note in the mail from him.  This was known as “getting Chucked.” 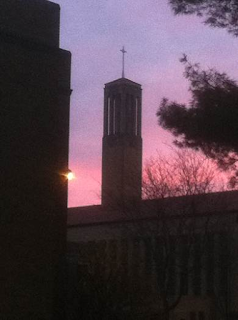 He had great respect for his predecessor.  At one point, Father Byrider had decided to have some trees removed from the property.  Monsignor seeing the trucks stormed out of the rectory and told the tree cutters to get off of the property.  Being informed of the incident, Father Byrider allowed the trees to remain rather than upset the man for whom he had so much respect.

Another example of his great love for priests in general, Father Byrider did not insist on his right to take over the pastor’s suite at the St. Sebastian rectory.  Instead, he let Monsignor finish out his stay there while he took rooms in the west wing originally constructed for Monsignor’s sister and there he stayed eventually even allowing his parochial vicars to take the “good room” after Monsignor had finally  passed on to his great reward.

Thus closes the first period of the history of the parish.  The dedication and foresight of its people, religious, and clergy, especially that of founding pastor still have a profound effect on its people today who carry on the proud work of Christ in the hopes of passing on a strong faith and powerful parish for generations yet to come to West Akron.
Posted by Fr. V at 6:15:00 AM