FRIDAY POTPOURRI: PARISH HISTORY: FOUR FOR ONE AND ONE FOR FOUR

The Catholic world begins to change dramatically as we enter this year.  It is the opening of the Second Vatican Council.  From religious habits to the way Mass is celebrated, many aspects of the Church went through dramatic alterations.  This would include architecture.  But the original integrity of St. Sebastian church remains largely intact to this day.  Built with the same foresight as the rest of the campus and falling on the cusp of the Council, the building seems to have had a sense of the changes that were to come.  So the when the changes did occur, very little was needed at all by way of alterations.  In fact, besides the addition of a second free standing forward altar donated by the Wendelken family, there were no changes necessary, all other adjustments to the space being made later and for different reasons. 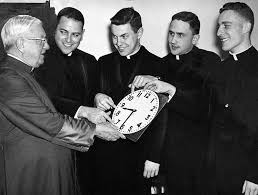 This was an unusual year for the parish.  It would be unusual for any parish.  St. Sebastian prides itself with a long line of sons ordained to the priesthood.  But in 1964, FOUR of her boys would be ordained on the same day, the Rev. Francis LaRocca, the Rev. Joseph Kraker, the Rev. William Karg, and the Rev. David McCarthy. One of them, Fr. Karg, would later become the fourth pastor of the parish.  Another, Fr. Kraker, would become pastor of the parish’s mother parish, St. Vincent. 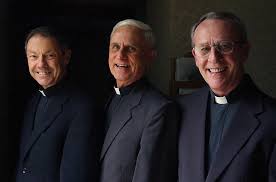 A picture appeared in the Akron Beacon Journal concerning this rare event.  Monsignor Zwisler stands, holding an oversized clock normally used in the school to teach children how to tell time, while the four men who are about to be ordained point to the times each chose to celebrate his First Mass of Thanksgiving at the parish.

In a Beacon Journal article dated May of 2004 covering the 40th anniversary of these men, Marie Thomas tells a story about how mischievous they were in school.  “We had a front door and a back door in our classroom.  They would sneak out the back and rap on the front door.  When the nun went to the front door, they would sneak in the back.” 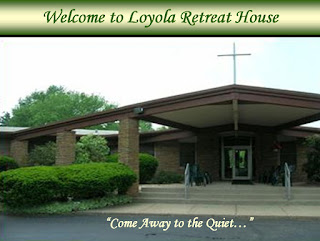 Having four priests ordained in the same year was quite an exciting thing but Monsignor was not out of tricks yet.  In 1964 a group of Catholics saw a need for a retreat facility in Summit County. On the first board were many prominent persons from St. Sebastian Parish as well as Monsignor Zwisler himself.  After appealing to the Jesuits for their sponsorship, the board raised the money needed and acquired a parcel of farmland overlooking Nimisila Reservoir near the Portage Lakes in southern Summit County.  Today it is known as Loyola Retreat House.