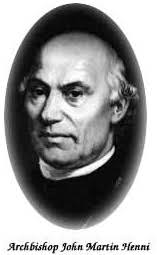 While doing some research for a project concerning the upcoming 90th anniversary of St. Sebastian Parish, I came across this bit of information:  The first known Mass ever celebrated in the city of Akron was in a log cabin owned by James McAllister who was a contractor in the early years of the city.  The priest who celebrated the Mass was named the Rev. John Martin Henni.  He was born in Switzerland but was ordained a priest in the Diocese of Cincinnati of which this area was a part.  It would be a number of years yet before the Diocese of Cleveland would be established.

One of his passions was to take care of the scattered Catholics in this part of the diocese which consisted largely of Germans and Irish.  It was in the year of 1833 that there is a record of him saying that first known Mass in that log cabin, four years before the mission church of St. Vincent was founded.  That makes this year the 185th anniversary of that Mass.

The pastors in this area are going to do something (yet to be determined) to mark this event.  It probably won’t be huge (the number 185, while significant, is not a number like 200) but in making it, hopefully we will be able to remember more significant anniversaries in the future.  If you have an idea on how to celebrate this event, please let me know (soon.)

How about a Mass for our cluster parishes (St. Sebastian, St. Vincent, St. Bernard, and St. Mary)? Maybe held at St. Seb or St. B because they are larger. We could invite other parishes as well. I bet the K of C would serve as an honor guard if requested. Maybe Bishop Perez would even come!

And perhaps an organ/choir concert beforehand, perhaps 20-30 minutes before Mass starts? The St. Sebastian and St. Bernard organs are especially fine. The parish choirs are also wonderful (and St. Bernard has a really super schola choir - my husband sings with them!)

And then a cluster dinner. It's been a long time, but when we have a parish dinner at St. Bernard, the parish arranges for the meat (roast beef, chicken, etc.), and everyone brings a side according to the initial of their last name (A-L vegetable, M-Z dessert), enough to serve 8-10. (*If it is in summer, we could have a picnic.)

The Spanish children at St. Bernard might be able to perform their ethnic dancing, after the meal, that they do on Our Lady of Guadalupe day. They are lovely - particularly my Goddaughter!

It doesn't have to be fancy. It will be wonderful to pray and eat together, and to get to know one another.

My husband and I would be delighted to assist in any way. You know me - your Tuesday afternoon office volunteer, and you may remember my husband from the K of C.

We could really use a party and an excuse to get the parishes together!

God bless and protect everyone at St. Sebastian - Sue, ofs