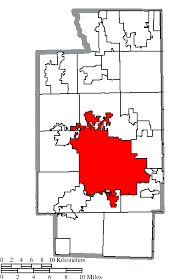 If you want an idea of how large of a parish St. Sebastian was at sixty square miles, the city of Cleveland, as the 48th largest city in the United States, is 82 square miles (only 77 square miles of which is land.)  The city of Akron is just a little over 62 square miles.  The parish of St. Sebastian was responsible for an area roughly the size of a large U.S. city, an area which was developing quickly, and becoming impossible for the parish to serve.  So it was in this year that another parish was carved out of the parish boundaries.

As the story goes, Monsignor Hilary Zwisler was inconsolable that his parish territory was about to be divided up.  To ease his distress, the new parish in Fairlawn just west of St. Sebastian would be named after St. Hilary of Poitiers.


According to the St. Hilary website, “Archbishop Edward F. Hoban ordered the creation of the Cleveland Diocese’s 224th parish–St. Hilary, approximately six months before the late Pope John XXIII announced the history changing intentions to call the Second Vatican Council. The parish was officially established on August 1, 1958. St. Hilary was carved from its mother parish, St. Sebastian, to serve the needs of a growing population expanding west of Akron in the 1950’s. The parish was born inside Copley Township, but within two years, found its property inside newly created Fairlawn Village. Father Edward M. Horning was named the founding Pastor and it was with 325 families that the new parish was formed. “During the initial development of the 10-acre site on West Market Street, the sacraments were celebrated at St. Sebastian’s recreation center. Monsignor Hilary Zwisler, pastor of St. Sebastian, and Father Horning broke the ground for a combined church and school on June 10, 1959. The first Mass was celebrated in the school’s gymnasium on Easter Sunday, April 17, 1960.

“The new ‘church’ was soon to become the grade school’s gymnasium and cafeteria the other six days of the week. St. Hilary School opened its doors to 270 students in grades one through eight on September 5, 1960. Five Akron Dominican sisters from Our Lady of the Elms staffed the school.”
Posted by Fr. V at 7:03:00 AM