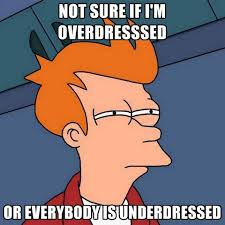 “I should probably be dressed better,” I thought to myself heading out on a walk.  I’m visiting some friends in Florida who live in a gated community.  Everybody here has the right outfit for every occasion from lounging to dining.  I look like I rolled out of bed directly to this walk with my baggiest shorts on, sandals, and a St. Ambrose Football T-shirt on.  Still, people were kind to the “bum among us.”

There was a two fold agenda for this walk: 1) to pray my rosary and 2) to see if God would give me anything to write about today.  One house away from returning home and just about giving up on having a topic for a post a golf cart pulled up net to me and a gentleman with a name tag pinned to his employee shirt called out, “Do you live on this block sir?”

“Ah!  Here it comes!” I thought to myself.  “What’s a guy like you doing in a place like this?” it seemed was implied, though the it would be meant in a reversal of the compliment it usually attempts to be.  So I simply said, “No.”

“He’s covering his tracks before he tells me this road is not for the general public,” I thought to myself and again said, “No.”  Seeing squirm a little I decided to come clean.  “I live in Akron.  I’m just visiting,” indicating the house behind us. 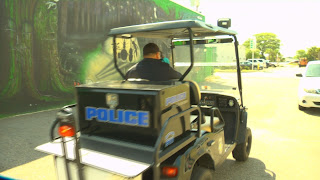 As it turns out, he was looking for somebody from St. Ambrose College (I get that often when I am down here) who was supposed to be golfing with him and he couldn’t find him.

“This T-shirt is from a Catholic primary school,” I clarified.

“I thought the colors were wrong,” he replied and we got into a discussion in the middle of the (otherwise deserted) street beneath palm trees, he in his golf cart and me in my baggy shorts.  It’s always an interesting reaction (though I am quite used to it now) when somebody finds out that you are a Catholic priest.  A book a read recently calls it the “airplane effect.”  You can talk rather openly to a fellow passenger on a plane telling him things you might not normally say to others simply because chances are you will never see this fellow passenger again.  Often   people react to priests in the same way opening up without much preamble.  Just so our conversation went.

“What’s your prayer life like?”  “What do you live for?”  “What is it that you hope for from your family?”  It was a graced moment under the sun for me and I hope for him.  I gave him a blessing and told him to say a prayer for me as he drove away and I would say one for him and invited him to email me questions if he had them. 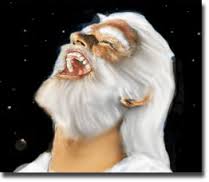 God is ironic and has a great sense of humor.  I think of my Mom.  She used to burst out into laughter every now and then and when asked, “What’s so funny?” would reply, “Oh nothing.  I was just thinking.”  When He is not crying I think the cosmos resounds with God’s laughter.  “What’s so funny?” the angels ask.  “Nothing, I’m just contemplating My creation.”

Say a prayer for this guy.  He was a blessing for my day.  Maybe though this post he may receive the blessings he needs.
Posted by Fr. V at 9:38:00 AM

I've become increasingly convinced that the most successful evangelization is "presence."

Stupid little lines like "Can't have lunch today because I'm hitting up the 12:10 daily at St. Bernard, what about Monday?" or something. Those seemingly little throwaway lines that express that faith is something that is a major part of your everyday life in some normal everyday way.

This isn't to say there's not a place for deeper conversations or more aggressive tactics, and it's not meant to minimize faith, but I've had more people come back to me days or months later after that than any argument or apology or explanation or debate.

It's easy to forget because there were SO many bad stories during the scandal-plagued 90's, but I wonder how many people reconsidered what they thought of the humanity of consecrated men and women just because a couple of nuns were omnipresent at Indians baseball games. I remember stories on this blog of ice being broken just because Fr. V wore a collar to Playhouse Square.

Not that the perfect argument to convince a Lutheran to switch sides isn't important...... but..... man.... it sure seems like there are millions more opportunities for someone out there who can express bits of faith and rays of hope in everyday life.

Love the new format, Father. Lightens the tone somehow and much easier to read for us old folks