ONE MAN'S TRASH IS ANOTHER MAN'S TREASURE

St. Sebastian has a nice rectory.  It is largely (though not completely) furnished from the refuse of our civilization - that is, the devil strip (tree lawn for non-Akronites), junk shops, and things from people's basements.  The coffee tables in the guest rooms come from the curbs and yard sales.  Paintings hang on the wall that were scheduled to be burned by the store holding on to them.  Most of the mechanical clocks in the house I adopted from the clock rescue.  (People who didn't want the clocks anymore because they were too much bother.)  Even the altar in the chapel came from a religious house house basement because they didn't want it anymore.

Now these efforts are moving into the church.  Now that I think about it, that is a lie.  We've tons of things over there that I've scarfed from trash bins and from the closets of unused toys at other parishes.  The latest is just the largest example. 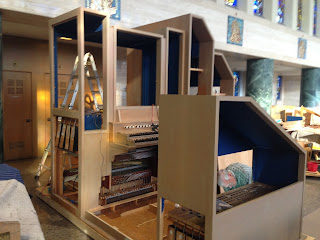 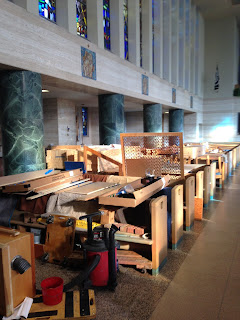 Huntingdon College, like the University of Akron, is retiring their organ major.  They had three organs taking up three classrooms and decided that they could put the rooms to better use if they could just get rid of the organs.  And the man in charge of the project had just weeks to do it or the organs would be destroyed.  That is where St. Sebastian enters the picture. 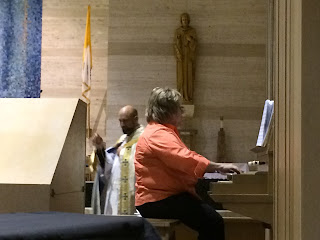 This Gabriel Kney tracker action, neo-baroque pipe organ was offered to the parish.  We had to act quickly.  There was not time to consult councils and musicians as we like to do.  It was impulsive.  But the price was right!  Read: FREE.  (If it doesn't work out, we can always sell it right?)

So it arrived at St. Sebastian just in time for a week that we unexpectedly needed a lot more seating than normal.  The number of events that happened that weekend meant that the assembly of the organ took longer than expected which meant that more pews were unusable because all of the pieces parts were spread out across them.

It is finally together and has been blessed for liturgical use.  It will take a couple of more months before it settles enough that it won't keep going out of tune.  It is like bringing a plant in from out of doors, it takes a while to adjust. 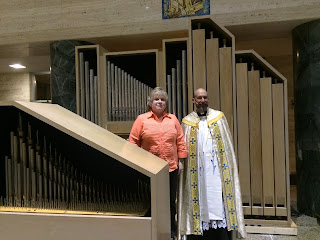 It may be used (if it is in tune enough) this weekend for Mario Buchanan's organ recital, to which you are invited.  (Sunday at 4:00PM - free and open to the public.)  The next time it is already scheduled for use is at the advent concert.  Keep your eye out for that one.
Posted by Fr. V at 7:11:00 AM

Tree lawn is "the boulevard " in these parts. Wonderful finds are found.