WHEN LESS IS MORE

In the most recent Sherlock Holmes movie ("Mr. Holmes" starring Ian McKellen) we see Holmes retired in a remote country home with a servant. Holmes is distant and the housekeeper somewhat frustrated.  Clearly she has more skin in the game and therefore Holmes, as her employer and almost sole source of humanity (poor girl!) is in control of the relationship.

Later, the tables are turned, and when the housekeeper no longer needs Holmes, having had enough of him and finding a new job, it is Holmes who now has much more skin in the game and she becomes the more powerful of the two in the relationship.

In any given relationship (family, friends, lovers) one person is always more in love than the other.  And it is the one less in love who is in control.  Because it takes two to Tango, it is the one who loves less who's veto or disinterest determines just how far any relationship will go.  The satiated one forces the other to diet. There are two important things with this (maybe more, but we'll stick with two today.  I want to get my breakfast.)  One is, if you find a person who will continue to love you when that person has had enough, that is the person to marry.  That is true love.  To be chosen even when the other person no longer receives any further consolation.  Wow.  That is love in it's rarest form.

The other is to remember that God is crazy about you though He receives no consolation from it.  God is complete.  He IS love.  Yet, He made you.  He redeemed you.  He was made humble for you and was born into this world.  He lived for you, taught for you, and performed miracles so that you would believe.  He was arrested for you, tortured for you, and died for you.  He came back for you.  He makes available to you His dignity, His power, and His inheritance.  It would seem there was nothing left to give and then He made His Body and Blood, Soul and Divinity available to you as the Eucharist.  I can't even imagine anything left that He could give except for His infinite patience and mercy. 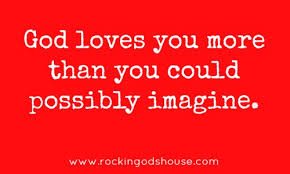 And as those who love less than our Lover, we are in control.  He will not force anything on us (another sign of His love and respect.)  The Bridegroom will love the Bride as fully as she we allow.  How deeply it goes is entirely up to us.  And no matter how deeply you allow Him to love you, you will never probe the depths.
Posted by Fr. V at 6:46:00 AM