TOLERANCE IS A TWO WAY STREET 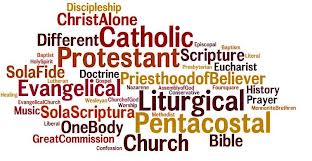 I received a short letter from a lady who was quite distressed that reception of Communion in the Catholic Church is limited to Catholics.  The implication was that Catholics thought of her as an inferior Christian.  (How she got that interpretation I am at a loss.  But there it is.)  Her letter begins by saying that she is, “a baptized and confirmed Lutheran who believes in one, holy, catholic, and apostolic Church . . .” but ends the letter with, “Justification by faith said Martin Luther.  He got it right.”  The first part of the letter makes it sound as though she sought unity between the Churches, but her last line strikes a strong note concerning our differences and how she is glad for them.

I would assume that in naming the Christian Church one, holy, catholic, and apostolic, words with which we resonate, underneath we would mean very different things.  And therein lays the problem:  Communion means we are “in union” and we are not.  When someone approaches to receive Communion we say, “Body of Christ,” and expect the reply, “Amen.”  What does “Amen” mean but “Yes!” or “So be it!” or “I agree!”  As Catholics we believe, of course, that the Eucharist is the Body and Blood, Soul and Divinity of Jesus Christ and that the bread and wine has ceased to exist.  But that belief assumes so much more.  It assumes that Jesus founded a Church with authority, and that it is the one true Church under the leadership of His vicar, the pope, that the way we are redeemed and saved is how it has been understood by the Catholic Church for 2,000 years, that the Catholic priesthood is what we say that it is, that works matter, and, well, I could go on and on.  To make this person say, “Amen,” then means one of two things: She denies her Lutheran belief and has chosen to make a public pronouncement that what the Catholic Church teaches is correct or, it doesn’t matter what the Catholic Church teaches which is silly anyway and therefore I may do as I please. 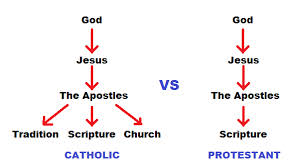 But here is the good thing that happened:  Part of Jesus’ mission was, “That they may all be one.”  But respecting each other and not receiving Communion at each other’s churches, we paid homage to the fact they we are indeed not in union.  So then rather than superficially looking like we are all the same page, we were able to actually address something here that would otherwise have gone under the radar and solved nothing.  This person was drawn to ask the question and I was able to respond.  There is the road back to unity.  Not ignoring it.
Posted by Fr. V at 11:00:00 AM

You've given one of the best explanations I've ever heard on the issue. I was asked the same question recently by a relative and struggled to give an answer. Next time it comes up (and it will!), I will be better prepared thanks to you! Carey

Unfortunately, there are some Protestants who feel so strongly about this issue that they receive communion at Mass anyway, knowing they are not supposed to, either out of defiance, or a misguided belief that somehow the Catholic Church is wrong and misguided in this teaching. I personally know of an Episcopalian who I have seen receive communion at the Rose Mass at St. Sebastian. As a friend of several of the sisters at Our Lady of the Elms, she believes that she's "allowed" to receive communion at Mass, because the sisters told her that it's ok - "we all share the same communion", or some such nonsense. And this, in spite of knowing full well what's printed in the Missalette regarding reception of Holy Communion.

I've pointed this out to her myself, but only get an argument. What's one to do? I'm so tired of seeing the Catholic Church disrespected, in this way and so many others.