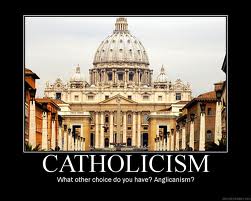 I don’t think (correct me if I am wrong) that any other religious denomination receives as much free advice as the Catholic Church.  I think we should take it rather a compliment that so many people want to be so helpful.  How often are there editorials telling the Episcopalians how to manage their affairs?  Or letters to the paper debating about the leadership of the Baptists.  Or Fox news telling Jewish people what they should believe by interviewing dissident Jews?  Or radio personalities touting non-practicing Methodists as experts on the practices of Methodism?  But the Catholic Church receives grand attention and in a back handed way I suppose we should take is as flattering that we are so (effective? numerous?  noticeable? counter cultural?) that we are deemed so attention worthy.

A recent article took the Catholic Church to task for having the name “Catholic.”  Catholic means, of course, universal.  (It reminds me of the true story of someone traveling overseas who saw a sign that stated, “Catholics fixed here” and what they meant was universal joints on your car.)  The Catholic Church is for all people, all times, and all places.  But if this is so, why do we not throw open the doors and let in all the people regardless of where they are in life? 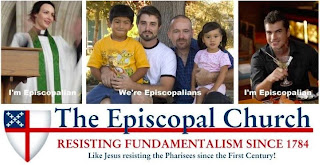 Held up for particular praise in this regard is the Episcopal Church.  Their “The Episcopal Church Welcomes You” signs, billboards, and advertising are most well known.  Their doors are wide and wide open.  One might think that if anybody was going to use the term “catholic” or universal, it would be them.  In fact, if you go to "Google Image" search and type in the words, "The Catholic Church welcomes you" all you will get is Episcopalian signs!

I wonder if Universalists would be surprised to discover that they are catholic (at least in name.) They could have signs that state, “The Unitarian Catholics welcome you!”  But I digress. 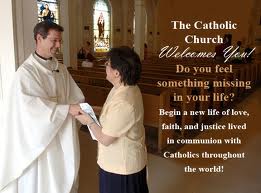 But having a church named “Catholic” does not mean that it is open to anybody regardless of what they believe, but that it is open to anybody willing to believe what the Church believes.  Whether you be poor or rich, young or old, male or female, of any nation, background, or of dubious history, you are to be welcomed into the Catholic Church if you hold her teachings to be true for she believes that it isn’t just about taking you no matter where you are or where you are going, but taking you from where you are to something greater – to what you are meant to be in light of the Gospel of Jesus Christ.  This is yours if you want it.  It is universally open to all, not universally open to interpretation.
Posted by Fr. V at 6:20:00 AM

And if some of the so called advice resembles bombs, remember they only drop them if they are directly over the target.... So, we really should rejoice...

I think I saw the article that Father is referring to - Maureen Dowd in the N.Y. Times. She's one bitter lapsed Catholic. And I heartily agree where the Episcopal Church is concerned - universal to a fault. One wonders if Cole Porter's "Anything Goes" is in their Hymnal - if not, it should be.