TUESDAY QUOTE OF THE WEEK CCLXI

FINDING TRUTH WHEREVER IT MAY BE FOUND:  "I object to a quarrel because it always interrupts an argument."  From G. K. Chesterton's "Magic"

QUOTE II: "Does it ever strike you that doubt can be a madness, as well as faith?  That asking questions may be a disease, as well as proclaiming doctrines?  You talk of religious mania!  Is there no such things as irreligious mania?"  Same source.

At the last Chesterton Society meeting we had a dramatic reading of G. K. Chesterton's play, "Magic; A Fantastic Comedy."  I think it went quite splendidly myself.  I was not typecast into the part of the Reverend Cyril Smith but was able to play the expansive character The Duke who Chesterton described as, "though an ass, is a gentleman."

Not only was there a member's birthday, we also found ourselves quite nearly equal distance from the anniversary dates of Chesterton's birth into the this world and into the next.  So Barbara had this cupcakes made up for the occasion.  You can just make out C. K.'s glasses and cape. 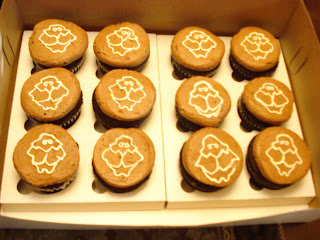 If you get the chance, check out the United States Conference of Catholic Bishop's website to see what is going on with the HHS mandates and what you can learn and do to help.

M.D. sent his neat photo in of a balloon rosary. 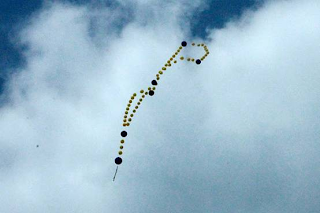 This was sent in: Bishop Leanord Blair wrote this article stating, "When you are in a position of leadership or authority, it is a great cross sometimes to know firsthand the actual facts of a situation and then have to listen to all the distortions and misrepresentation of the facts that are made in the public domain. Having conducted the doctrinal assessment of the entity known as the Leadership Conference of Women Religious (LCWR), I can only marvel at what is now being said, both within and outside the Church, regarding the process and the recent steps taken by the Congregation for the Doctrine of the Faith (CDF) to remedy significant and longstanding doctrinal problems connected with the activities and programs of the LCWR:  Read his article here.

From the Diocese of Cleveland Enewsletter: "The bishops of the United States believe our religious liberties are threatened by the Federal Health and Human Services mandate requiring religious institutions to offer and pay for health services which are contrary to our teachings. It is my hope that you will support efforts to educate and encourage each other to advocate for change. "  Read more here.

You will have to go to this site to see this week's video.  Don Matis is a parishioner of St. Sebastian Parish and an artist known as the "human paintbrush."  There is a short documentary at the site about him.
Posted by Fr. V at 10:46:00 AM