WAKE FROM YOUR SLEEP 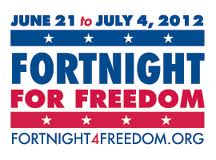 This past Tuesday we had a holy hour for the Fortnight for Freedom to pray and learn about what religion in the United States is up against with the HHS mandate.  There was a favorable turnout, more than we had anticipated, and then Fr. Pfeiffer packed up all the stuff and we went on with the rest of our evening. 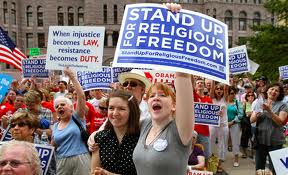 But the people who attended did not.  As it turns out a good number of them went to a coffee shop to continue the discussion.  (When was the last time Catholics spontaneously got together after Mass or a prayer service to talk more about the homily?)  One of the gentlemen with whom I spoke told of a feeling of camaraderie, unity, and the energy that one receives when bonded in a common cause with one’s brothers and sisters.  So as it turns out, history is rhyming once again.  Under persecution (and this is persecution under our Constitution) the Church unites and grows stronger.  Such as always been her history. 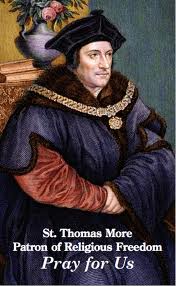 When asked what he was going to do about the Catholic Church problem Napoleon is reported to have said, “You cannot destroy the Catholic Church.  The Catholic clergy have been trying to do it for over a century and a half and they are getting nowhere.”  This is a Church that has faced the cruelest governments and has always come out stronger for it.  But it has happened that the faith of a nation has, from time to time, almost died out.  One need just cast a furtive glance to France once known as the backbone of the Church to see that this is true.  In order for that to not happen here we must wake to the challenge.  The lion has been stuck with a stick.  He needs to wake up.
Posted by Fr. V at 5:42:00 AM

Father Valencheck, where did you find the quote by Napoleon?

The church in Canada and England faces persecution as well, with the legalization of same sex "marriage" in both those countries. It's a shame that countries whose laws were based on religous doctrine and morals have become so thoroughly secularized. All Christians, both Catholic and Protestant, will need to be engaged in this fight.

I did some googling about the Napoleon comment, and found that Fr. V's quote is turned around. It was a Cardinal who said that to Napoleon when Napoleon threatened to destroy the Catholic Church.
According to CatholicCulture.org:
"[Cardinal Ratzinger]recalled the words of Cardinal Consalvi, when he was informed that Napoleon wanted to destroy the Church. "He will never succeed," Cardinal Consalvi said; "We have not managed to do it ourselves!"
http://www.catholicculture.org/news/features/index.cfm?recnum=12411
If you google "Cardinal Consalvi and Napoleon" you will find variations on the quote but the same general idea.

may the saints be praised --the supreme court in its WISDOM upheld the AFFORDABLE health care act---i am dancing for joy!!!!!sincerely, nancy ulrich

Thanks, great to hear from you, Nancy. I, too, think it is important that we have some rationality in our currently chaotic health care system, so I am glad the Supreme Court has upheld it.

As for the HHS mandate, I am bethought of a quote from "A Man For All Seasons" (the Robert Bolt play about Thomas More):

"Thomas: On what compulsion is the oath?
Meg: High treason.
Thomas: But what is the wording?
Meg: Do the words matter? We know what it means.
Thomas: Tell me the words. An oath is made of words. It may be possible to take it.
Meg: Take it?
Thomas: And if it can be taken, you must take it, too.
Meg: No!
Thomas: Listen, Meg. God made the angels to show him splendour.As he made animals for innocence and plants for their simplicity. But Man he made to serve him wittily, in the tangle of his mind. If he suffers us to come to such a case that there is no escaping… then we may stand to our tackle as best we can. And yes, Meg, then we can clamour like champions, if we have the spittle for it. But it’s God’s part, not our own, to bring ourselves to such a pass. Our natural business lies in escaping. If I can take this oath, I will."
(END OF QUOTE)

I do not like the HHS rule; it seems it would place an impossible burden on Catholic institutions that might be forced to provide insurance coverage that includes abortion. However, we must look at exactly what the law says.

This week, a measure to protect conscience has been introduced in Congress. See http://www.usccb.org/news/2012/12-129.cfm

"Instances of discrimination against pro-life health care providers continue to emerge, and some states implementing the Affordable Care Act have begun to claim that they can force all private health plans on their exchanges to cover elective abortion as an 'essential health benefit,'" Cardinal DiNardo wrote. "By closing loopholes and providing victims of discrimination with a 'private right of action' to defend their rights in court, Sec. 538 will provide urgently needed relief."

I feel hopeful that this rule will be resolved in a way that does NOT make one have to choose between civil law and one's religious beliefs.