HOW COME I DON'T REMEMBER IT BEING THAT WAY: TRIDUUM 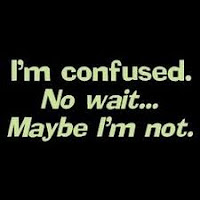 Interestingly nobody made a peep that there was going to be rubrical changes in the Mass when everybody was either cheering or bemoaning the new Mass translation. There are quite a few that will hit us during the Triduum. The savvy Catholic (or the one not deeply in prayer) will notice a few changes (assuming that your priest noticed that there are, in fact, changes in what we are to do.)
Most are pretty innocuous. There are a few you might pick up on however. Here are a few:
GOOD FRIDAY: Instead of walking in and going directly into a prostration, the celebrant and other ministers will bow and then lay down in prostration.
The deacon has a stronger role in the ten petitions now. The “Let us kneel – Let us stand” is now optional. Congregations are encouraged to either kneel or stand through the whole of the singing of the petitions. 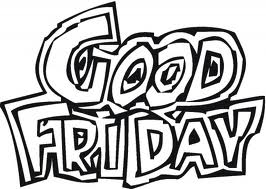 For the revealing of the Cross the first option is to have the deacon present the priest with the Cross in the sanctuary and as the priest uncovers the cross it is he that intones the response three times. The Cross is to be covered in violet (not red) and ALL are to kneel momentarily after each response.
It is still permissible to process the Cross in from the door of the church, but in this instance the Cross is NOT covered.
Here’s a very interesting one: Now the priest is to remove his shoes and his chasuble when he venerates the Cross.
Last interesting one: The ministers will now genuflect to the Cross (the Blessed Sacrament being taken away) before leaving the sanctuary.
HOLY SATURDAY: 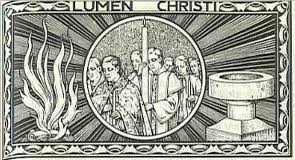 When entering the darkened church with the Paschal candle, the presider now lights his candle after the first “Thanks be to God.” Everyone else lights it after the second. The church lights, save for the candles at the altar, are also lit at this point.
Before the Gospel, the celebrant is supposed to intone three solemn alleluias which are answered by the people before the Gospel procession begins.
Before communion the presider may address the newly baptized and those welcomed into the Church about the specialness of their First Holy Communion. 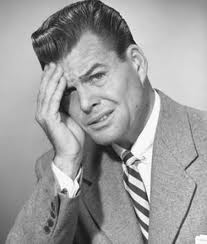 There are other changes but they are comparatively minute. These are the ones that, if you have been to the Triduum before, might cause you to look quizzically and wonder, “I don’t remember that.” That is because we haven’t been doing it that way!
Posted by Fr. V at 7:43:00 AM

It is GOOD that the colour of the veil for the Cross on Good Friday has returned to violet!

It would have been GREAT had the colour of the vestment that day been restored to black...with folded chasubles and broad stoles for deacons!

I will pray that you all remember the changes. It is a lot to keep in mind.

You made it to the front page of New Advent! Boo yah!

So I guess that means when all the paid talking heads came to give us their expert opinions and said, "the rites aren't changing - only the words are changing" they were lying.

Last one to leave, turn out the lights.

You would leave the Eucharist behind because of this? REALLY???

Anon, I'm not sure, but I believe these rubrics were in the editio typica all along, but were simply not translated--just conveniently left out like the bees in the Exultent due to dynamic equivalency theory. Don't worry, the lights will be back on at the Easter Vigil!

There certainly are changes, but a good number of those mentioned in the article were also there in the last Missal. In most places, pastors adopted the alternatives instead of the first (primary) option. Where the first option was in place, only 2 or 3 three "changes" will be observed.

I probably won't notice a thing because I'm going to Our Lady of Walsignham, the Principal Church of the Ordinariate of the Chair of St. Peter,an Anglican Use parish to celebrate most if not all of these. I bounce between there and a fairly traditional minded Novus Ordo parish. I am glad to see the Novus Ordo mass slowly being celebrated more as it was intended.