TUESDAY QUOTE OF THE WEEK CLXXXVII

FINDING TRUTH WHEREVER IT MAY BE FOUND: “It is considered mor

e withering to accuse a man of bad taste than of bad ethics.” G. K. Chesterton

QUOTE II: "She’d learned that courtesy meant the most to those with no right to demand it.” from Sharon Kay Penman’s, “Devil’s Brood”

Have you ever heard of a site called The Vortex? A couple of you sent this video in from that site. The information in it is very interesting but I find his approach not as helpful as it could be. I think he is preaching to the choir (maybe that is his intent) but if you were not already in his camp you might be more inclined not to listen to what he has to say. In any event I found it at least interesting and provide it here for you to see if you choose. Thanks for sending it in!

I don't know if it made it into the national news or not but there is a parish here in the Diocese of Cleveland that is verging on becoming a schismatic parish should things not turn favorable between the bishop, the priest of said parish, and the people who attend there. Here is Bishop Lennon's latest statement provided by the Diocese of Cleveland Enewsletter.

Russ sent this link in for a funny cartoon.

Russ also sent this link to Young Fogeys. It really has nothing to do with this site except that I found it funny. The first part of the video is the funniest if you don't want to watch the whole thing. Thanks Russ.
This is a picture of the front garden of Saint Sebastian from the bell tower. Nice job guys! 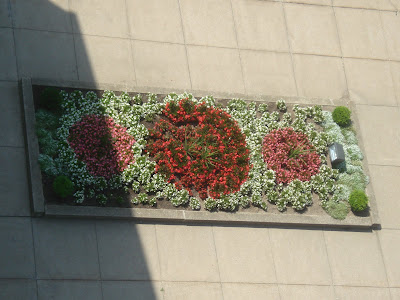 A doctor friend of mine sent in this article blurb: "Catholic hospitals provide best care, according to rankings: Catholic and other church-owned health systems tended to have the highest quality outcomes and deliver "significantly better, more efficient care" than for-profit health systems, according to a study from Thomson Reuters." More
Did you know that the Catholic Church owns approximately 237,000 acres of the Unites States. This and other fun facts can be found here.

Servant and Stewart has this post of the Pope's message to altar servers.

In case you did not catch it Friday, head over to Sancte Pater to see how Vincent responded to last week's post on the priestmobile.

I stole this joke from Fish Eaters:

Two men considering a religious vocation were having a conversation. "What is similar about the Jesuit and Dominican Orders? " the one asked.

"What is different about the Jesuit and Dominican Orders?"

Happy Birthday!! May God Bless you!! Hope you have at least a little time to relax today!!

I don’t like the Vortex. If I remember correctly, this guy falsely smeared Archbishop Dolan.

Re: the Bishop Lennon letter, would you believe I spent a lot of time exposed to these schismatics in high school? They’re clown-ministry, dissent-group people. This split was inevitable. The comments Clevelanders made at the end of this article are accurate. http://www.freerepublic.com/focus/f-religion/2571348/posts

And happy birthday too!

Happy Birthday! Hope you have a great day!!