TUESDAY QUOTE OF THE WEEK CXXV

FINDING TRUTH WHEREVER IT MAY BE FOUND: “But Christ did not overcome the world by running for office or leading a campaign of insurrection against the Caesars.” From Thomas Nevin’s “Therese of Liseux”

QUOTE II: “In may day television was called books.” The Princess Bride

Fr. P and I were discussing Catholic friendly television shows – surprise – there are not too many. NCIS is one as well as the original Law and Order. Neither are a proponent of Catholicism by any stretch of the imagination but at least often they give the Catholic perspective up against others. N.B. This is not the case for the Law and Order spin offs. Eash.)

There is another program that I have come to like (although more recently came across a rather raunchy episode so my recommendation is not an excited one.) It is actually not Catholic friendly in the least. The characters are in fact rather anti-Catholic. But it is an honest portrayal of these characters with all of their foibles and not merely an attack on the Catholic Church. It is called “Mad Men” and one of the few, few, few shows that I take the time to watch.

My sister found a site at which you could “Mad Men Yourself” much like the site at which you could Simpsonize yourself. I could not get a Roman collar on so this is the next best thing that I could do – at a bar with Mr. Draper trying to convert his wretched soul on his territory. Gads, for some reason I can't get it on here. I will try again next week.

Here is the site if you would like to give it a go.

The Diocese of Cleveland Enewsletter asks, "Did you know, the National Catholic College Admission Association is a non-profit organization of Catholic colleges and universities committed to promoting the value of Catholic higher education and serving students in the transition to college?"
Martin wrote in last week a little too late for me to post, "This is Martin from John Paul the Great Catholic University, an authentically Catholic business, media, and technology school in San Diego, CA. Our theology professor Michael Barber has produced a video reflection on the Mass readings for August 9th. I thought your readers might be interested in it as a way of preparing for the Sunday liturgy." Or, in this case, reflect on what you heard last week. We are continuing with John 6 anyway and it might be a good recap. Here it is.
This is a picture that I could not post yesterday. 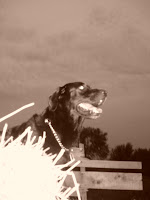 The barn has the Mail Pouch logo on it that a friend of mine and I painted. It is the second time we painted it. Here is a site to see pictures of the first barn we painted which subsequently burned to the ground!
Posted by Fr. V at 7:22:00 AM

I love Mad Men too. Did you know the redhead bombshell is the same lady in those Progressive Insurance commercials? She's so cute!

Kevin O'Brien (Theater of the Word) will be doing weekly (1/2 hour) dramas on EWTN. Not sure when the series begins.

I recently came across your blog and have been reading along. I thought I would leave my first comment. I dont know what to say except that I have enjoyed reading. Nice blog. I will keep visiting this blog very often.

ck! I had to go back and look at a commercial - wow - would have never guessed that on my own.

Thanks Wallis and welcome!

Anon - if youy find out let me know!