FRIDAY POTPOURRI - WHAT DO YOU THINK?

You came with a lot of great ideas for to replace Friday Fair. There are still some symbolic things we can throw in but a lot of the things about which you wrote were also very good. So maybe Friday will become “Friday Potpourri.” It will cover a limited scope of topics. Thanks for the grand idea.

One of the topics recommended is vocation stories. There was a series a long time ago in which I described my own vocation history. I enjoy hearing them also so if anybody has a vocat

ion journey story and would Email it to me I would be most please to post one occasionally.

One of my favorite stories came from my first pastor as a priest. His name was Fr. Robert Hilkert. He had a way of telling stories and I do not know exactly how much of it was true and how much of it was true in a way to make the story more interesting. The way he tells the story however is that he and his brother were told that they were going to go away for schooling. A concept that was terribly exciting. It was not until he had installed himself at school that he came to discover that it was a seminary.

Apparently the pastor of Saint Vincent told him that his sons had possibilities and that they should try out the seminary – which they did though not of their own volition. The interesting part is that both he and his brother Fr. John Hilkert stayed the course and were ordained. 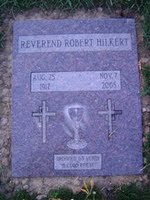 The brothers greatly loved the priesthood and were model priests in many ways though quite different from each other. Once in the seminary it never really occurred to Fr. Robert not to continue on in the priesthood. It was a natural fit though he claims not to have much considered it until he actual found himself in the seminary.

To his dying day he could not understand why more men did not choose the priesthood. He spoke of it as such a grand and privileged life and his example and joy was always evident.
Posted by Fr. V at 8:02:00 AM

In the earlier parts of the 20th century, priests were almost "revered." I'm sure that their lives had challenges and heartbreaks as well. But nowadays, I get the impression that priests almost have a "bullseye" on their backs when they go out in public wearing their clerical attire. So, todays priests have all the blessing of those earlier priests but may also have some challenges that "older" priests did not have to consider as "part of the territory."

You have that right.

I like Friday Potpourri. A mixed bag to cover several topics should prove to be very interesting.