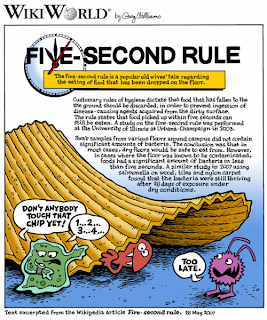 Do you believe in the five second rule? An M&M saved from the floor and ingested by one party leaves the other party disgusted. The offending party cries out, “There’s a five second rule!” but the offended party steadfastly declares that there is no such thing. It is difficult for the discussion to move forward because each refuses to give way to the other’s basic set of presumptions.

Dr. Andrew Trew, a bioethicist that we are fortunate to have living in the Diocese of Cleveland points out that the reason life issues are so difficult to discuss is that we are starting with two completely different sets of assumptions. The beginning point is not the baby or the man on death row or what (or rather who) have you, but with an understanding of what life is. Here are two common points of view.
The first is the Christian, particularly Catholic point of view. Life comes from God and is therefore a

gift entrusted to us. We are not only matter but also spirit made in the image and likeness of the God who fashioned us and we are to grow to become more like him. Because there is a God who created us purposefully and that there is a purpose to life, and goal to be achieved, there is therefore a universal order of absolutes and truth which can be reached through faith and reason. Thus all life is to be treated with dignity and respect and so the taking of life can only be done in the most dire and strictest set of circumstances.
The secular view, which runs counter to the Christian/Catholic point of outlook, begins from these presumptions: Life evolved by random consequence and therefore exists for itself

so that the person who “has” life therefore owns it. We are material (animal) and, if we so choose, we are to develop the image we have of ourselves. Because life began by random chance there is no more meaning to life than what we declare it to have and therefore truth is subjective and open to opinion except that which can be proven through science and reason. Because of this life acquires the value which we assign to it and can be done away with morally through human legislation for scientific, safety, convenient, therapeutic, environmental, or other reason deemed beneficial by those in a position (have the power) to make such decisions.
This is part of the reason we have difficulty carrying on the debate. We are running two different races, running in two different directions with two different starting points, each yelling at the other as we pass, “Hey! You’re running the wrong way!” No we’re not. We are, each of us, running the right way to two different finish lines. In essence there are two different religions at work and both carry some mighty presumptions. Because of these presuppositions the beginning standpoint for the Catholic is the obligation of service and care for the other while the secular starting place is “my rights.” “Can’t we all just get along” is not a great option. It is like putting two teenagers in a room and telling one they have the right to paint the room green and listen to acid rock and the other can paint the room white and blast their Mozart – the positions are antithetical.
Thus the argument will not be won through simple rhetoric for we are speaking different languages. It will be won through the winning of hearts to the noble and well lived out cause.
Posted by Fr. V at 6:27:00 AM

Dear Father, Excellent explanation as to why we are not assured of sucess in converting those "on the other side" through the use of reason. The Holy Spirit must open their hearts to receive the truth. I could become very discouraged in my pro-life work unless I remember that the Lord must "build the house." He expects me to continue the work but He is the one who brings forth the fruit, not me.