The day that was designated to say goodbye to my previous assignment was a beautiful, sunny, warm day. The final Mass was said, many warm words and kindnesses exchanged, and then at the exact hour, minute, and second that the Knights of Columbus were to show up in their various and sundry vehicles to move me from one rectory to another the skies darkened, and the rain came down like the first day of the 40 day flood. This was followed by hail and winds that took the power out in some areas. But the Knights, like your local postal carrier, would let neither rain, nor hail, nor the impending parousia keep them from their appointed rounds and thus a caravan of cars and vans jumped on 271 south to Akron full of boxes and bags.

Akron was under similar curse that day but boxes were carted into 476 Mull Avenue wet but not much worse for the wear. And then the most miraculous thing happened. When the last box had been set down and the Knights sat around the dinning room table to have some pizza (the usual agreed upon wage for helping someone move) the skies cleared, the sun came out, and the curse had been lifted.

Moving into a new r 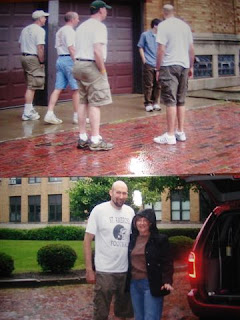 oom like this not so much as having seen it before for longer than a handful of minutes was like staying in a hotel. It was set up to feel homey but nothing is yours, your things being all in boxes. The next day was the first day “on the job” and it started at 7:00AM with a finance council meeting. Things have not slowed down much since. But I love it.

And that was pretty much it for the process of being assigned to a new place though there are different means by which this happens also. This was just a description for this particular situation. It seems not so different than what many people go through with their jobs save the help of the Knights of Columbus. And thus brings to an end of this series. The diary will resume its normal recording of an interesting event from the past week on Monday.
Posted by Fr. V at 6:06:00 AM

Mondays are always my favorite. As a seminarian it is always so nice to hear of parish stories and your experiences. Please keep them coming.

7:00 AM Finance Council meeting? That'd be one of the first things I'd want changed!
Q: "What did you change when you came to St. Sebastians?"
A: "I moved the finance council meeting from 7:00 AM to 7:00 PM. I'm selfish that way."

I was a little jittery all last week w/o my fix of the Monday Diary. Thanks for the post.

Another interesting series might be the ol' vocation discernment process. I think young men considering whether or not they are being called to the priesthood would find it an interesting read.

Dear Father, We were so happy to hear that we had a pastor (and, hopefully, a "good" one) we may have overlooked the poignant farewells which necessarily accompanied your change of assignment. Awhile back, as an associate pastor at St. Sebastian was leaving for his new parish, he said, "The spirituality of the parish priest is 'letting go.'" I hope your busy schedule has helped to ease the transition. As we were preparing for a new pastor, a question that was asked of us at the Town Hall meeting was what we would like from our pastor in his first year. Among the responses was "Don't evangelize the outer community until you evangelize us." "Teach us to apply the scriptures and our Catholic faith to daily life." "Enliven the faith of our children and the parents; teach the parents to be educators." You are in my prayers.

All meetings must be one hour or less!

Only pizza??? In the many, many times I have moved (and requested friends & family to help) pizza & beer were what I had to provide (beer being the most important - and not the cheepo brand).

I concur with raven-smiles - 7:00am meeting would have to go! I'm barely functional - let alone trying to think about financial stuff that early (and I work in a finance department!).

We are so happy for you and the the Parishioners at St. Sebastians - they have themselves a wonderful Pastor! Although we do miss you up here at St. Clare.

Thanks Ernie - I was pondering keeping it - I think I shall.

Raven - Actually it is awefully swell to have it in the morning when you are fresh. It would kill me that late.

Anon - Actually that was done a spell back - type in discernment in the search field and it will bring it up (and a lot of other articles that have been posted here.)


Pat - never thought of that but it seems to be true. Of course the opposite side of that coin is that we are constantly saying hello to new people. Thanks for the prayers.

Rob - I SO agree. Fr. Hilkert always said that - if you can't do it in an hour you are either trying to do too much or you're doing something wrong. You also lose people that way. I TRY to follow that.

Thanks L.M. as usual!