TUESDAY QUOTE OF THE WEEK LXXXV

FINDING TRUTH WHEREVER IT MAY BE FOUND: "Obedience. The most thrilling word in the world; a very thunderclap of a word. Why do all these fools fancy that the soul is only free when it disagrees with the common command? Even the mobs who rise to burn and destroy owe all their grandeur and terror, and sort of authority, not to their anger but the their agreement. Why should mere disagreement make us free? I know you are fond of dancing; do you want to dance to a different tune from your partner's? You are a fine horsewoman; do you want to think of walking northward all by yourself, when you and your horse are going southward together?" from G. K. Chesterton's "The Surprise" Act 1 scene III

You might remember the hawk mentioned in last week's post. As it turns out the second grade boys have named him (and aptly so) Sebastian and have had sport watching him crash into trees after game. Out parish photographer Stephen S. captured this shot of this beautiful bird. You may want to avoid look at his talons however. That was Jimmy the squirrel.

N.B.: If you are sending Emails to my StSebastian address - the servers had been down for several days. You might want to send it through the address attached to this site.


Kay sent this video in quite a spell ago but I did not (and still do not) have sound on my computer and so was able to listen to it for the first time the other day at a friend's house. Enjoy.

ON CELIBACY: I generally dislike getting inspirational notes and such jamming up my mailbox, but this one from F. S. seemed good enough to share: "Celibacy can be a choice in life, or a condition imposed by circumstances. While attending a Marriage Encounter weekend, Ray and his wife Charlotte listened to the instructor declare, 'It is essential that husbands and wives know the things that are important to each other.' He addressed the men,'Can you name and describe your wife's favorite flower?' Ray leaned over, touched Charlotte's arm gently and whispered, 'It's Pillsbury All-Purpose, isn't it?'And thus began Ray's life of celibacy."

The Diocese of Cleveland Enewsletter suggests reading "Abortion and Faithful Citizenship" put out by the USCCB.

Here is a new site to me: Students for Life. They are college students taking a strong role the struggle for the dignity of human life.

Lastly, here are some pictures of the great oak coming down after being badly damaged in the last storm. it is quite a feat and interesting to watch - though sad. 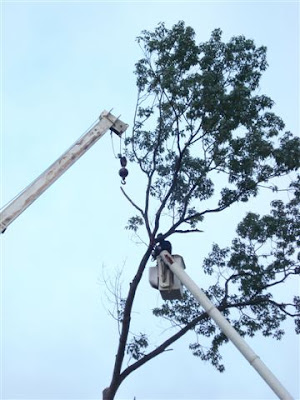 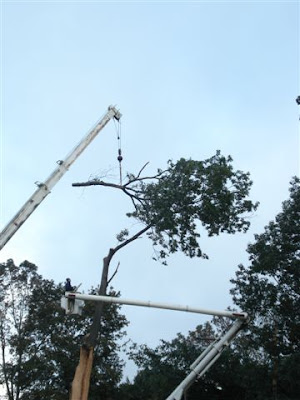 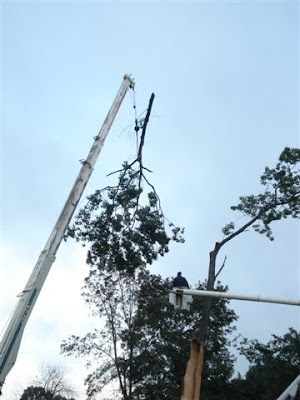 Email ThisBlogThis!Share to TwitterShare to FacebookShare to Pinterest
Labels: G K Chesterton, Quote of the Week

Poor Jimmy! We have hawks around here and I always worry about my littlest cat (a hair under 6 lbs)but I think she's a bit too big for the hawks.

Adrienne, there was a very hungry hawk around here a few years ago.. a cat will hear a hawk long before the shadow falls on it, but folks were cautioned to keep their little dogs on a leash after one was spirited away.

and by the way, Kay, that video is really cool. People are so creative!

Carol - My little doggies never get off the bed long enough to get spirited away....