Today we begin with one of the two people who greet me in my room every morning. When I wake up she and Saint Augustine stand outside my window staring at me and urging me to get up and start the day. I did not notice it until recently as the mornings are now darker and Church lights are on and these windows visible from just outside my bedroom window are lit up. 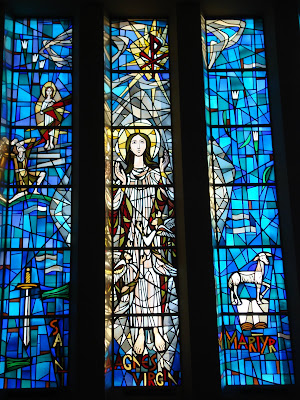 As the first virgin to represent all virgins for Mary’s title as Queen of Virgins is Maria Goretti. She wears both white, the symbol of innocence and the red of a martyr. In her hand is a bouquet of lilies for purity and palms which alludes to her victory over death. She was martyred when her attacker stabbed her in the neck with a knife. She lived for several days after ultimately forgiving her attacker. The angles guide her to heaven into the hands of her loving, heavenly Father who is represented by the hands extending from the heavens at top. 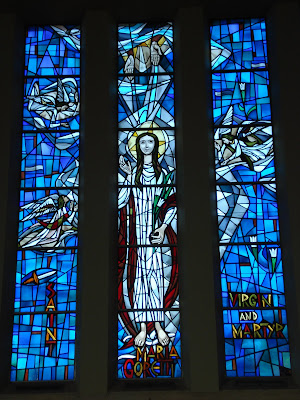 Agnes too was a young when she was proposed to by a pagan. She had already decided to give herself completely to Jesus who is represented by the chi rho whose rays descend upon her, and so she declined the suitor’s offer. He reported her to the authorities and had her sent to a brothel. In the upper left hand corner we see that God protected her from lewd advances and so she was able to preserve her innocence as symbolized, again, by the lilies. The sword tells us that she was beheaded. “Agnes” means lamb (Agnus Dei – Lamb of God) and we see the Lamb on the Gospel book to the lower left.

There should be silence in the church and all ancillary rooms before Mass begins. This is actually a recent proclamation in the new General Instruction of the Roman Missal.

Popular devotions are to be highly endorsed. Vatican II all the way: Constitution on the Sacred Liturgy 13.

The liturgy is the source and summit of our lives. Part of the heart of Vatican II – CSL 10.

The priest should face the people. Actually this was a practice even before Vatican II. Case in point is Saint Peter’s. The objective was to face east. It was not until after Vatican II that this was a common practice. But it was not a mandate of Vatican II

Gregorian chant must be given a place of pride in liturgical services. Constitution on the Sacred Liturgy (CSL) 116,117.

The practice of having sacred images in Church is to be maintained. The full paragraph in the CSL can be found in number 125.

The priest should face the people. Ooops. Said this one twice.

Latin should be preserved in the Latin rites. CSL 31 but it does also call for the vernacular to be used to a greater extent in addition to the Latin.

All Latin Rite Catholics should be able to sing or say their parts of the Mass in Latin. CSL 54.

The pipe organ is to be held in high esteem, other instruments permitted by permission. CSL 120.
Posted by Fr. V at 7:18:00 AM

Wow! What a way to be greeted in the morning!
Thanks for the answers.
Was the altar at St. Peter's against a wall as I see some of the old altars? I am just trying to get a image of this in my head. I thought most were against a wall or something of the sort.

The rpesent St. Peter's was always a free standing altar. The church faces west so in order to say Mass facing east, they had to face the people. There is some evidence that the people also turned east at a cruscial point of the Mass also. It has nothing to do with faceing the same way as the people or facing the people, but the symbolism of facing east - Jesus, the light of the world, our dawn, God . . .