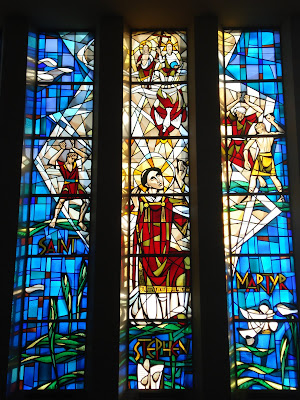 Next in the litany is Queen of Martyrs. The first to represent the martyrs is the first martyr, Saint Stephen. Not only was he the first martyr he is also the first deacon. Here we see him dressed in a dalmatic, the distinctive vesture for deacons. In the particular case the dalmatic is red, the color worn today when we commemorate the martyrs who spilled their blood for Christ.
One of the responsibilities of the deacon at the Mass is the Gospel. At bottom center is the open Gospel book. Three stones lay on top. His witness for Christ was not only his proclamation of the Word, but that he would defend it even to the point of death. On either side of him are the men who stoned him to death for his loyalty to Christ. The stones on top of the Gospel book pay tribute to this witness.

The stones also mimic the vision of the Trinity which he had at the time of his death. Stephen was the first recorded person to pray to the resurrected Christ. In calling out to him he had a vision of the Trinity and here we see the Father holding an orb and imparting a blessing, Jesus in a red martyr’s mantle and holding His Cross at His right hand, and the Holy Spirit descending as both a dove and a tongue of fire. 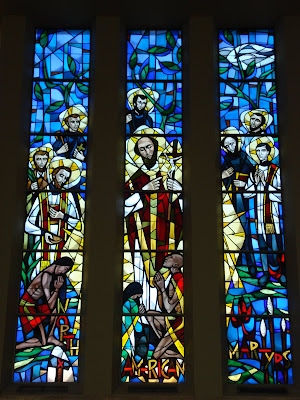 The second window depicts more modern martyrs, the North American Martyrs who came to the New World to bring Christ to the indigenous people. They were martyred by the Iroquois 1642 – 1649.
Posted by Fr. V at 5:55:00 AM

His witness for Christ was not only his proclamation of the Word, but that he would defend it even to the point of death.

I think this is understated in our lives today. Much of what we do seems to be self centered and not centered around God. We truly need to bring God back to the centerpiece of our culture.

.. dude. you say....
The second window depicts more modern martyrs, the North American Martyrs who came to the New World to bring Christ to the indigenous people. They were martyred by the Iroquois
.. dude. . cmon with all due respect
.it works BOTH ways.
In 1647 a Jesuit priest[ society of jesus indeed] named Paul Rogueneau, ministering among the Hurons, expressed more tolerance and patience than MANY other clergymen attempting to educate the “heathens”: the dude goes on to say. "One must be very careful before condemning a thousand things and customs, which greatly offend minds brought up and nourished in another world. It is easy to call irreligious what is merely stupidity, and to take for diabolical workings something that is nothing more than human; and then, one thinks he is obliged to forbid as impious certain things that are done in all innocence, or, at most, are silly but not criminal customs.... Ï have no hesitation in saying that we have been too severe in this point.".. get it.TOO SEVERE
in MANY cases they PROVOKED their own demise with thier OWN brand of salvation GOD had NOTHING to do with it but DOGMA CERTAINLY DOES. .
ITs fact that when babies were baptiezed { AZTECS} at one time the spanish would break their skulls open with stones so they DONT revert BACK to thier PAGAN{?} ways.
now were those little aztec rug rats MARTYRS also KILLED by those who baptized them.??? does that make those who baptized them MURDERERS in the eyes of god?? After ALL they were" christians FIRST".
i see now a little clearer why WINDOWS are TRANSPARANT.. in this fantasy we call reality there really is NOTHING that is clear anyway. ...

Sattvic - I can't argue with much of what you say - but it is dangerous and unfair to judge people of history with modern morays. It is like faulting people in the past for painting with lead paint before we knew how bad it was for babies. But over all, some good points there.

but it is dangerous and unfair to judge people of history with modern morays.
..DUDE!!!!!!! thats my point EXACTLY.. THATS where all the trouble BEGINS. combining two different schools of thought which creates ONE mess of CONTRADICTION, and calling it ABSOLUTE fact that cant be contradicted or challenged.
.IF people looked at things for what they ARE and NOT for what they wanted them to be, peace just MIGHT be a little more apparent in ones life.[ but DONT take my word for it. ]..
Example those "windows". I'm sorry but I GOTTA comment. I'm ready to scream when I saw the first ones there. yeah yeah there "nice" and all that . but I see them this way. they are done by " craftsman" NOT artists.
sure if everyone ohhh and ahhhed every one will think they are WONDERFUL
. But really. take a GOOD look..
they are clunky, lack imagination, and depth, there is no sense of style nor flow, they look like something bought in wall mart. as compared to classic "stained glass" I know Im always pushing the envelope on your blog but I couldn’t go on without saying something about those windows.
I'm an ARTIST.[landscape painter] and I KNOW stained glass and how to create it. . This contemporary interpretation of those windows is the cutting edge of BORING work. to many angles , NOTHING flows. its just IN YOUR FACE. “ look at me . I'm the new look of leaded glass” it seem to say.
there is NO passion in any of it. Who ever designed them must have the personality of a squid. .
Compare that to the older more classic tradition . you give an example of not using lead paint etc. well the technique is exactly the same as it was 900 years ago , lead and all. [ only more modern ways of cutting the glass of course]. but they[ the artists] wretched out fantastic colours and depth and truly were a spiritual manifestation of creativity under far more duress conditions. AND INSPIRED PEOPLE TO A GREATER SENSE OF AWE AND REVERENCE Those windows that are showing on your blog look like “cookie cutter” patterns , there is NO depth and to many angles. Yet people feel “ oh aren’t these beautiful”. in this case I guess” size DOES matter”. the larger the monument I guess the easier it is to convince [ fool ]someone they are wonderful. . and better to convince oneself that they are wonderful . why ?? because they probably cost and arm and a leg to pay for them.. ok ok . that's it.. I wasnt going to comment . but like I said being an artist makes me wanna SCREAM when I see nonsense like that and people call it ART………………. arrrrrrrrrrgh.. have a good week.

"they are clunky, lack imagination, and depth, there is no sense of style nor flow, they look like something bought in wall mart. as compared to classic "stained glass"……NO depth and to many angles"

Unlike these windows that you praised last year?

anon dude
\ ok i checked the link. WHAT ?? there was NOTHING there. although on Sat April 7 2007. there is a window that is TOTALLY cool., thats fantastic. .also the ones on the "left" of this blog are pretty cool to they look more contemporary. AND another thing. I cant believe ive been reading this on occasion for over a YEAR>>>>>>>>>
arrghhhhhhhhhh
. i DONT HAVE A LIFE hahahahahahaha
I was thinking anon. Maybe i COMMENTED on the SAME windows and PRAISED them??
i dunno. if your trying to make me look like a fool . well DUDE
YA DID!!!!!!!!!! hahahahahahha.
good for you
. but that was then this is now. the windows as i see them today are BORING. gimme a point of reference.
Also last year, i was hitting the deamon rhum around this time. so my vision might have been slighted or i was desperate and being patronizing. cause the dude that runs this blog is totally cool . I like him . he's a class act. I sense his sincerity. and tats a turn on . [ I'm NOT patronizing him]. . but from a very sober observation[ today] one would HAVE to be totally into “grippin the grape” to LIKE those presently posted.[ widows]
its ok . there’s nothing WRONG with any of it. its just that they are boring. not everything can be “ bells and whistles”.
one of the most exciting things I have done was to watch WET WHITE PAINT DRY ON WALLS. most people find that boring… people always said that . so I had to see for myself. . but it was just the opposite . so you see there is something for everyone, AND. nothing is ever permanent anyhow. ..
SO gimme a better access to the link and let me see if I made a fool of meself.
.

Dear SattVic, You have the soul of an artist and the intensity to match. These particular windows were installed in a church that was completed in 1958. I suspect, therefore, that they were intended to be "modern interpretations" of the stained glass windows of old. We don't necessarily like the windows for their artistic merit. They are a "visual catechism" to remind us of our faith and of its confessors. However, if you think that THESE windows are insipid, you should see the poor substitute for "stained glass" at a neighboring, even more "modern" parish: mostly blue, asymmetrical shapes, and just about the only figures on them are the church's patron saint and a coiled snake. I'm glad I have Fr. V's windows to look at, believe me!

thanks pat. you CANT hide the TRUTH . glad ya expressed your feelings. quite simply ......... they are BOOOOREINGGGGGGGG. its that .

You know perfectly well why you've read this blog for a year - because despite the fact that you occassionally DRIVE SOME OF US NUTS - you provide - ALWAYS - that countering point and we love you for it.