Ready to get in shape for the summer? Continuing the posts on symbolism here is a wrap up on the general discussion about shapes though at different times shapes will reappear in discussions about other topics.

The dome and square architecture, as was mentioned last time, played an important symbolic role in many but not all early church buildings. Whether it incorporated a dome theme or not, you will notice a good many churches (usually built before Vatican II) were constructed like a long hall or nave with a cross aisle or transept. This creates the shape of a cross. Saint Peter’s in Rome, which does use the square and circle (dome) combination, is in the sh

ape of a Greek cross. The outline of a cross is clearly noticeable in the roof line of this church building.

The triangle is going to be fairly obvious to you. Because it is a single figure created by connecting three equal lines it is the ready symbol for the Trinity, one God in the Three Persons.

Building on this theme we can use three circles (from last Saturday’s post) and intertwine them so that not only is there the idea of the Trinity, but now we’ve incorpora

ted into it all that the circle symbolizes: God, eternity, otherworldliness. Variations on this theme would be using just the outline of the figure or even just the inner section. For similar effect a single triangle and circle can be intertwined. (Picture provided by this site.)

The triangle may also be used as a halo, but only for depictions of the Blessed Trinity. The triangular nimbus usually sports three rays of light emanating from it. A triangle with an eye at the center is used by the Church to represent our omnipresent God who looks over us at every step on life’s journey.

The pentagram, a five pointed figure created from five straight lines was a symbol of the five wounds of Christ and commonly used as protection against the power of witches and demons. In the Middle Ages it became more readily associated with Satanism because of its use among magicians and subsequently fell out of use in much of Christian symbolism. The inverted star was seen as a goat’s head, (snout pointing down, the other four points representing the ears and the horns) a symbol of the damned (Matthew 25:31-46.)

The star shape itself however still figures heavily in our symbolic alphabet. A star is a symbol of divine guidance or favor. The most obvious star that comes to mind is the star of Bethlehem. Mary is often referred to as the Stella Maris or Star of the Sea. Mary is frequently seen as having a crown of 12 stars which represent her twelve fold office of queen as proclaimed the litany prayed in her honor. 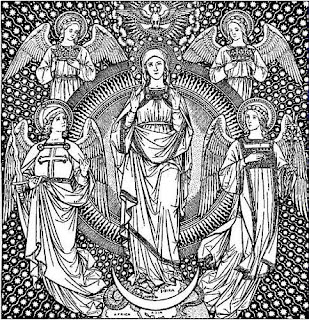 A different kind of star, the Star of David represents creation. Most commonly associated with Judaism it occasionally makes its way into Christian symbolism. Both the numbers 6 and 7 are associated with creation. The six points of this star (or its six points plus the its center point) call to this to mind.

Yes actually, though the 12 titles do not have have a direct connection to the rosary (but is still a later interpretation as you say and symbols aqire the meaning that we assign to them), it is true that the stars stem from the Lady of Apocolyps though assigning the twelves stars as the 12 tribes of Israel (or the apsotles or the Church . . .) is in itself an interpretation - though a most excepted one. She (the Lady) in that context comes to represent the people of the Old and New Testaments which we should see soon. I'll get into numbers shortly.

Thanks Rob! If all Catholics had the breadth of knowledge of the faith that you and so many of readers here have we would not be in a catechetical crisis!

Actually, since I was never catechized, I have huge GAPING holes in my knowledge of the faith. I'm going to keep trying though! Thanks.

the shape is square
the symbol is a "sign"
the message is ...
well, it changes from time to time.
enjoy.

Jim - Good laugh! Made me think of the picture posted with Tuesday quote of the week.