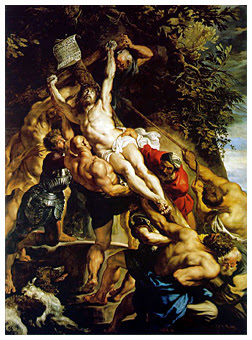 It is Holy Saturday and we are waiting excitedly for the Great Easter Vigil. First, however, will be the Blessing of the Food at 1:00! Hopefully someone will have some home-made sausage they want to share with Father . . .

Here is the last installment of a letter that I sent to a friend who questioned my pro-life stance. Sharing it with you know allows me to concentrate on Holy Week at the parish. I was grateful to her for the opportunity to sit back and take stock once again exactly why I say and believe many of the things that you read on this blog. It may have seemed meandering at times but that was due to specific questions that she asked which I was trying to answer.

Am I out to ban contraception in the United States? No. Well, no more than anything we would
like to see stopped that we feel is unhealthy and leads to the general cultural decline we see. Do I want to see abortion banned? Like you I would rather see it become unnecessary but ceasing the killing of innocent persons, yes, I go along with that. The consequences of that move, I believe, are far less detrimental to women, men and babies than the direction we are going.

Part of my own enlightenment came from hearing confessions. The damage and the healing that takes place there would blow you mind away. Maybe that is for another letter.

Anyway, I also agree with you that there should be full disclosure information. But at appropriate ages and that the information goes both ways.

I am also for full parental notification. These are their parents! Persons under age may not get a tattoo or have their earls pierced without parental consent. Once again, not to do so is placing in the hands of the government (or organization) the most intimate and sacred institution of family. Why does this not scare people?

Finally, I did find it a little disingenuous to say that these organizations fight for life and then walk away from the problem. Nothing could be further from the truth. Without support from the government (which the abortion industry has in spades) there are ample organizations that pray daily for mothers, fathers, and babies. There are places to go and support groups and councilors (many volunteer) for women, single and married, to go to for assistance, for training, for support (physical, mental, spiritual and financial), adoption centers, post abortion counseling, the sacraments of forgiveness, Catholic social services, and yes, many, many people who adopt these supposedly unwanted children. (Remember, they have to be offered up for adoption first. I grant you the difficulty of adopting older children with problems.) In the parishes in which I have been assigned, there have been many children adopted from such situations (some with serious problems – but still human beings) and from similar situations from around the world such as China. There are girls adopted from there since the government enforces a one-child policy. Girls are not wanted. So they are killed or adopted out. What does that say to women about the value of women? It is a horrible message, yet in the United States we send that message to groups of people each and every day on a grand scale in the name of some right of another human being to not be encumbered by them. This is far more damaging to the social psyche than we even realize.

These are most of the reasons for why I am pro-life.
Update for the Catholic schools that had games scheduled for Good Friday: It was the coldest opening day on record for the Cleveland Indians who report today that at least they were not aware that it was Good Friday. The game was postponed for a total of 2 hours and 53 minutes due to inclement weather (not counting the additional hour the game was postponed in honor of Good Friday). The game was called after less than 2 hours of play with no win. (I erroneously reported earlier that the Indians had one. They were one strike away from being able to complete the game.)
Pope Watch: Look for Pope Benedict on the front page of the NY Times magazine tomorrow.
Posted by Fr. V at 3:48:00 PM