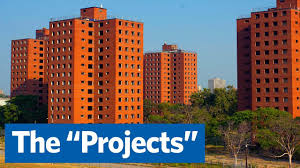 It is one of the most short sighted agendas in our culture that our poor need food, shelter, clothing and medical attention and that then we have done our job.  What a horrendous mode of existence.  It is one of the terrible blunders of housing for the poor.  We build large, ugly buildings in which to warehouse people and wonder why they are not more inspired.

In the Holy Land, the places where we visited were not beautiful places to live.  (I have been assured that in other locations there than the ones we visited the case is much different.)  There was very little in the way of public art, in many areas the litter was as abundant as leaves on the ground in Ohio in the fall, there were few parks and, for the most part, I was not inspired by the architecture.  (There are many reasons that this should be the case, but just the same, this is the way I saw it.)  What was beautiful were the places of worship.  Entering in, one would see (often) good and inspiring architecture, art (some great, some adequate) music, order and (to varying degrees) cleanliness.  They are places (at least in theory) that are open to the rich and the poor alike.  It is a God send (quite literally) that they exist.  One is transported from the traffic and crowds and heat of he day to a place of serenity and beauty of which the poor are particularly in need. 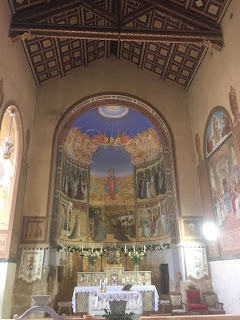 One might say that in the United States, we have plenty of publicly accessible art to inspire rich and poor alike and that we should spend all of the money on the poor.  (Let us set aside for a moment that the largest contributor to the poor in the world - governments included - is the Catholic Church and that most of the people making these accusations do so while not living in ugly houses in order for them to give more money to the poor yet not invited the poor in to enjoy their homes.)  But even so, where is the public art the inspires anyone in our Christian Judaeo heritage?  Such art is eschewed today.  It is not funded.

Add to that the amount of public art in West Akron that no longer exists.  The Indian on West Exchanged was removed albeit for safety and preservation reasons.  A statue of the early pilgrims that once was on the property of ACME #1 was removed with promises that they would provide a new piece of art (which has yet to happen.)  Where is the ONE place you can go to be inspired by truly and unapologetically Christian art?  Your church (at least I hope.)

Not only that, if we do not inspire artists where will they hone their skills?  By people who will hire them.  If we do not - look around at who will willingly pay them and what messages are being delivered to our culture.

Not only is it patently not hypocritical for the Church to engage in the mindset of being patroness of the arts, she is grossly failing her people, particularly the poor, if she does not.  A pastor who allows his parish to order “art” out of a catalogue should be horsewhipped.  (Well, maybe he should just go to confession.)  The parish is the original “free museum.”  The keeper of a culture in a greater culture that is increasingly divergent.  To do anything less is woefully negligent.
Posted by Fr. V at 7:18:00 AM

I agree with your take on conditions in Israel. I expect it is perhaps because they are more concerned with security issues, which is sad but understandable in such a holy and historical place. I didn't realize what a nice, clean place Akron is, and what nice people live here, until I travelled there. Clearly, decades of living with violence have taken their toll in the Holy Land.

Really, it was like Dorothy entering into Technicolor in Oz when we went from the grim streets filled with broken glass and trash and entered the gates to go to Mass, where the churches are often behind high walls. Suddenly it was quiet, exquisitely clean, and peaceful. As you said, the church architecture and art was stunning and inspirational. The difference in just a few feet was shocking.

I thoroughly agree with you about the importance of public art and beauty. As a parishioner of St. Bernard (and I am sure you have the same experience at St. Sebastian), I am used to hearing people comment on the beauty of the church. The next thing out of their mouths is what a shame it is that the Church doesn't sell it all off and give the money to the poor.

Our church was built and paid for before the first Mass was said there (which is why the small, white consecration crosses are on the walls). If it burnt to the ground tonight, heaven forbid, we could never afford to rebuild it. The parishioners of that time were very generous with their money and talents. We sometimes forget that when these older churches were built, many parishioners were immigrants who did not speak English or could not read and write, so it was important to have artwork that educated. They did not live in tidy, clean neighborhoods. They often lived in great poverty, in slums, without the conveniences we take for granted, like running water, electricity, central heat, washing machines, and toilets. The churches, with their great beauty, wonderful liturgies, and heavenly music, were a real haven from their daily drab, difficult lives. The very poor, along with the more comfortable and wealthy, worshipped together in beauty, welcome and beloved children in their Father's home. In the end, our beautiful churches are not for us - they are for God, because nothing is too good for His house. But as you say, art, good music, and beauty is not just for the wealthy and comfortable - it is for everyone, including the most humble.

Sorry to yammer on so much, but what you wrote hit a cord with me. God bless all of you at St. Sebastian! - Sue, OFS