One of the most interesting spaces in the house is a room that runs along the back of the garages, a half flight of stairs down from the main hallway It is about ten feet wide and forty feet long.  Two walls are solid brick and the other two broken up by a series of six, floor to ceiling arches of screened windows that look out on to the park across the street.  The ceiling is of dark timber with two copper light fixtures (another having gone missing and been replaced with a ghastly security light) and, at the time of this part of the story, it had a floor covered with Astroturf and the space packed with boxes and furniture.  It was a storage room.  The potential and desirability of the room was immediately evident and space was found to store the boxes and furniture elsewhere, patio furniture was excavated from out of the garage and re-commissioned, a tapestry from a local thrift shop was tacked to the wall, and plants and some old decommissioned candle sticks gave the room the final touches.  It easily became one of the favorite rooms to hang out in. 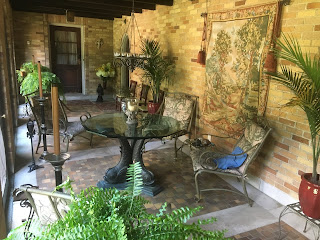 My sister was the first to voice her disapproval of the word “porch” for this space.  Remember that our experience of a porch was the newspaper stoop.  This room was too nice a space simply to be called a porch or breezeway.  A contest was launched to find a better word for this space but they all felt just as bland or definitionally deficient.  Then one day, in the record’s room in the basement of the rectory, trying to put some organization to the blueprints of all of the parish buildings, from the floor plan for the rectory a new word was added to my vocabulary.  Written in the architect’s hand where the room struggling for a name was to be found, was the word “loggia.”

As it turns out, a loggia is an open sided, roofed gallery that runs along the front of a building.  This is exactly what this room was before a second story was plopped on top of it.  All being satisfied with the word, from then on we retreated to the “loggia.”  (It was about a month into using this word that my architect brother in law pointed out that the “g”s in the word loggia were soft.  Ooops.)
Posted by Fr. V at 6:20:00 AM

To be clear, famous or well known but NOT in a negative way!