Now I know some people might be offended by the following post.  Maybe it really doesn't deserve to be on the blog.  But it was the oddest thing.  During my week away, I had many encounters with unique toilets.  It was just a common theme that I could not seem to escape.

There is no doubt that this topic touches on something that is universal to all of humanity.  It doesn't matter how rich or poor you are, if you are depressed or happy, a believer or an atheist, this is just one of those things that unites us together.  The other end, if you will, of the other common experience we have for the need to eat.  It is a sign of our humanity and as such plays a unique role in our collective imagination.

It occupies much of our thought.  A local paper called, "The Devil Strip" (if you want to know why they call it that, ask someone from Akron) has a regular feature entitled, "Urine Luck" which is a review of local spots where one may found themselves in need of taking a break from everything (with the possible exceptions of reading and talking on the phone) and giving way to this need. 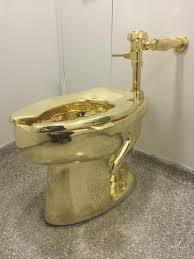 So I was with my sisters in New York and among the museums we visited was the Guggenheim.  If there is one thing the Guggenheim, designed by the famous American architect Frank Lloyd Wright, is NOT know for it is having plenty bathrooms conveniently located.  There was one single, unisex bathroom, however, that had a particularly long line and which was guarded by a docent.  Outside of the door was a plaque just like all the other articles of art had.  This one is called, "America" and when you enter, you find a toilet fashioned out of gold.

The guide book calls it, "One percent art for the ninety nine percent."  That seems pretty accurate to me.  It is an outrageous extravagance normally reserved for the insanely rich being made available to the masses (who can afford to get to New York and pay the entrance fee.)  In the end (ha) we are all really just human beings who have to use such things.  Some people get to have fancier surroundings and others not so much.  When one thinks of the public art that could be produced, what's really the point of a person having a golden throne?  There are lots of interesting social commentaries one could carry on about this - not the least of which is, "Is this art?"  I'm glad it was done, think it should have been done, is beneficial that it was done, but - art?  I know some will disagree but - there's another post coming on that I suppose. 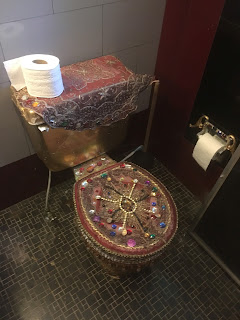 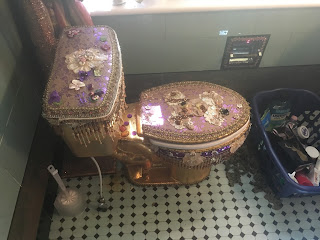 Moving on from there, there were these dandies.  There was an estate sale in West Akron this past week and I got a text that said that I must visit it.  This place had everything: full theater, bar, generous bedrooms, but EVERYBODY was talking about the smallest rooms in the house where these beauties were located.  There is a such a stigma about these articles.  We don't really talk about them.  We want them clean, quiet, out of the way and not too extravagant.  There is something humbling about even having to use one.  Even Sebastian looks slightly ashamed when he has to go in the park.  But look what this lady did to hers.  It is the commode equivalent to the Red Hat Club for women of a certain age who go out wearing hats and purple and red clothing.  No discrete plumbing here, this says, "Look at me and be bedazzled!" 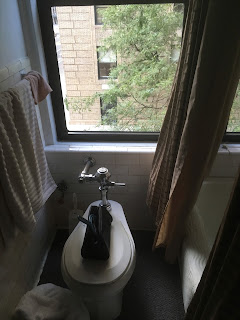 Maybe this humanizing thing is ONE of the reasons bathrooms and who can and which one has become such a political hot potato.  It says a lot about how we define ourselves.

The apartment we stayed in in Manhattan was pretty small.  There were four of us staying a swell place that was really designed for two.  That meant there was not a lot of privacy save for showers and you-know-what.  And of all of the commodes, this was my favorite.  Notice there is no tank on the back of it and a large window that overlooked a street corner.  Did you know you could sit backwards on such a throne?  Further, you could crack open the blinds and watch people going about there business or prop your book agains the window and read while resting your elbows on the window sill?  For an hour if you need to?  For that is America.  That is bedazzled.
Posted by Fr. V at 6:56:00 AM

one of the finest inventions of all time bar none

That brings back a memory; When I was a little boy, someone told me that all the toilets in the rectory were solid gold. Is that true?

But, (pardon the pun) if the blinds were open when you pulled down you pants everyone would be able to see you crack with that window there.

My kids & I were browsing a B & Q here in Shanghai. Most of the toilets for sale have an electric cord so that you can activate the various extra functions like "seat warmer" or "fan dry". My son is hoping that our next toilet is one of these!

Do you think there are toilets in heaven?