THE TALE OF TWO DEATHS

It struck me that I might be more morbid than I thought.

In my sitting room their are two paintings of a man at the end of his life.  One of them is of St. Sebastian (which goes over to the church during the month of his feast) and the other is of Jason of Jason and the Argonauts fame (both by Mr. Eric Armusik.)  As my friend Fr. Barry once said, “You only die once so make it good.”  Both of the these men were famous, well loved, but died very differently.  Both were tragedies (though not completely unforeseeable) and brought an end to a life of adventure, daring, respect, inspiration and excitement.  So much so that we still teach and talk about them to this day all these hundreds and hundreds of years later.  But one leaves us with hope and inspiration and the idea that even when we “lose our life we will gain it.”  The other is just depressing and reminds us that, “All is vanity.” 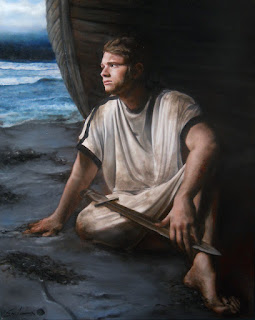 Jason is pictured here at the end of his life.  He sits in the mucky sand below the bow of his famous ship the Argo.  His once immaculate clothes are soiled and there is rust on his sword.  Great grandson of the god Hermes, Jason sought to reclaim the throne that was taken from his father.  He puts together an all star team for his beyond-the-state-of-the-art ship the Argo and goes on many adventures.  He swears life long love to the sorceress Medea who assists him and has two children by her.  Of course, Jason is successful in all of his wild and legendary adventures.  But in the end, he turns on the family that was so loving and devoted to him to be with another woman who would be more politically advantageous to him.

As a direct result of his treachery, Jason loses everything (and I mean everything.)  He lost the love of both women, his children died, his friends left him, he didn’t have the throne nor did have riches.  In the scene depicted here he sits below the rotting, beached hall of his once renowned boat thinking over everything he had thrown away.  He then falls asleep and the bow of his decrepit ship crumbles apart and crashes down on him killing him instantly and this story is told to us as a warning. 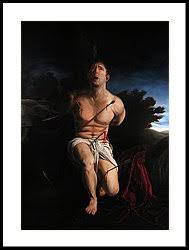 Sebastian, on the other hand, was an undercover Christian serving in the Praetorian Guard in the Roman army during the time of the Diocletian persecution.  While serving the emperor as well as he could and becoming a much trusted and decorated soldier, he also assisted as many Christian as he could even to remaining true to God even as they faced execution for this crime against the state.  Many saints were made because of Sebastian.

Sebastian is picture here almost at the end of his life.  He kneels on the grass tied to post where he would be riddled with arrows.  His once proud uniform has been stripped from him and cast aside, his helmet tossed on the ground.  The son of pagans, he found Christ and desired to go to Rome where the persecution of Christians was most intense.  He becomes one of the greatest soldiers under Diocletian and had a star studded troop of soldiers under him and lived a life of daring and adventure.

As a direct result of his Christian mission, Sebastian loses everything (and I mean everything); his great standing in the guard, the protection of the emperor, his citizenship and even the right to his life.  In the scene depicted here he has just been hit by a volley of arrows and falls to his knee.  But there is a light on his face.  It is not the rising sun for that is at his back.  It is an intimation of his vision of heaven.  Hope surges that all is not lost or forgotten and he begins to rise to his feet once more (and we know he survives only to confront Diocletian to then be clubbed to death) ands story is told to us to show us how to become saints.

Thanks Father for two very interesting stories. I was unaware of Jason's end - have seen the old epic "Jason and the Argonauts" many times.