Four Mass times were scheduled for that first Sunday and 1,200 people were in attendance.  Precious Blood Priests from Cleveland and Canton assisted with Masses (and did so until 1940).  The very first collection was $475.37.  Monsignor wrote a personal thank you note to everyone who contributed.  The first parish baptism, Marie Catherine Boesart, was held that day at St. Vincent Parish at 2PM.  Office hours for the parish began at St. Thomas Hospital in the evenings from 7 to 9:00PM and an appointment could be made by dialing LIncoln 734.  During this same period, in exchange for his lodging, Father served as a chaplain for the hospital and a “moral medicine teacher” for the first class of nurses. 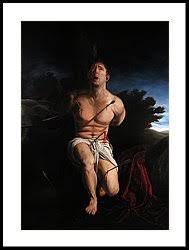 At the end of the first month of the parish, Monsignor wrote the following letter to the St. Sebastian parishioners:

“The first month of the new parish has passed into history.  With sundry difficulties which were not without anticipation the month revealed many encouraging facts.  From the very first, people, almost without exception, heeded the call of their Chief Shepherd, the Rt. Rev. Bishop, enrolled under the banner and the patronage of St. Sebastian.  The attendance at Mass has been excellent and the moral support accorded to your pastor has been praiseworthy.  For the first month of the trying period of the organization the financial support has also met with approval.  The total for the four Sundays of August was $2,003.74, approximately $500 per Sunday.  So far approximately 1200 adults are registered.”

At the Sunday Masses of September 5th it was announced that on Wednesday there would be a meeting at the Rankin School auditorium for the women of the parish for the purpose of establishing the Sanctuary Society, an organization that exists to this day, which makes it the oldest organization in the parish.  100 women were in attendance at that meeting.  A committee was set up to plan some gatherings.  They met at Mrs. Jas. Flynn’s home on October 7th to plan a First Card Party.  It was held at the Knights of Columbus Hall and was a combination bridge party and dance hosted by the Sanctuary Society ten months after its founding.  500 people were expected to attend.  A second card party was held by Mrs. Stowe. 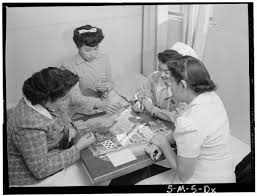 The card game played was Bridge.  There have been continual Bridge Flights since those founding games making it the official card game of the parish.
Posted by Fr. V at 6:49:00 AM