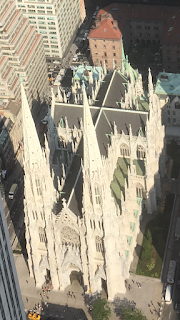 It was interesting seeing St. Patrick Cathedral transformed from grey and black to this brilliant white color as the structure was cleaned and repaired.  However, it is one thing to see such a building transformed, it is quite another to witness it being built.  There are opportunities to do this however.

The Episcopal Cathedral of St. John the Divine in New York began construction in 1892 and still has quite a ways to go.  But that is what makes it fascinating to visit.  Uncompleted towers are stunted.  Interior stonework simply ends.  The beautiful finish work exteriorly gives way to rough stones and bricks.  Still it is one of the five largest cathedrals in the world.    It is simply magnificent.  Read more HERE. 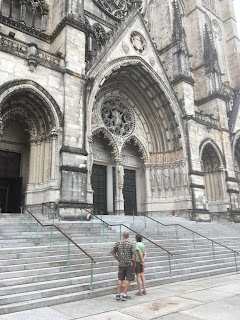 Historically a church of this size would take about 500 years to build.  For a contemporary peer comparison, recall Sagrada Familia in Barcelona which began construction in 1882.  Both of these structures have only been under construction for a little over a century.  While there is hope that it will not take another full century complete either structure, compared to their elder equivalents,  are going up at lightning speed. 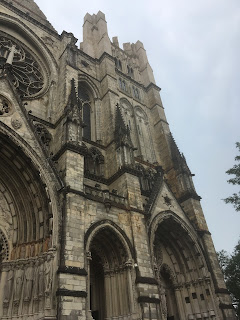 I was visiting St. John Cathedral with a non-Catholic, unchurched architect who marveled at the building even more than I did (and I was pretty awed.)  What was equally as fascinating to me however was the perceived shift in the direction of those in charge of the cathedral from its inception to the modern day.  Granted, I was only there one day and did not engage anyone in deep conversation, so take this with a grain of salt.  But if the art and architecture’s first impression spoke for itself, it was captivatingly interesting.  From what appeared to be a very traditional Christianity, there are contained within its walls one of the earliest modern depictions of “Christa,” Christ as a woman on a plexiglass cross.  Read more HERE about it. 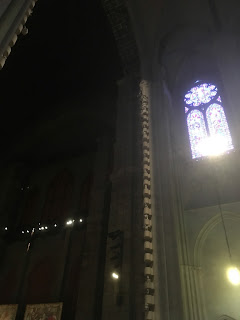 Speaking with other Catholic sensitive persons, we discovered that we had similar experiences.  Approaching the building, it gave off a welcoming feeling.  In fact, it looked more Catholic than most modern Catholic churches (if I may be so bold.)  It takes a while of being there and taking in the art that a Catholic steeped in religious art will start to feel a little bit unbalanced.  Not that it is bad but that it is different.  It is like being in a parallel universe where everything is just a little bit off as in the Mandela Effect (read more on that HERE.)  One can see clearly in stone, paint, and other mediums how very similar we are, and how very different we are and as time goes by how that divide seems to deepen. 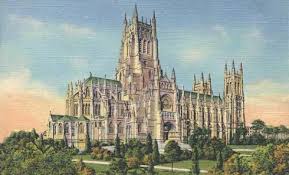 If you get the opportunity to visit both St. John and St. Patrick, make many mental notes on theme, topics, theological emphases, and philosophical groundings.  It becomes clear how important the arts are and why the Church needs to take seriously her role as patroness of the arts and, in general, stop buying all her mass produced art out of catalogues.
Posted by Fr. V at 7:46:00 AM

I understand what you are saying. I usually tell my friends something is "off" to my Catholic eyes/ears. Not that I object to everything about the piece but it is not how a Catholic would present it.

I entered an old Church with a Protestant friend. It was a beautiful building, stunning really. Just after we entered the Church my friend wondered aloud what denomination the Church was. I said "I don't know, but it is not Catholic." He was very taken back and asked how I could know just entering the Church. I said "There are no people." I pointed to the stained glass windows, the walls and the altar. No Christ, no saints.

Looking back on it, I could have really offended him. But I think it gave him a chance to think of all of our art and statutes from a Catholic perspective.