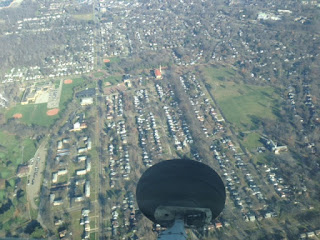 Immediately a search was begun for land on which to build the new parish.  Land prices were soaring in the 20s due to an economic boom and great consideration was given to waiting for the right place at the right price.  An original site was considered at the south end of what is now known as Schneider Park but what was known then as the Sunset View Estates.  The price would be $50,000.00.  A certain amount of anti-Catholic sentiment kept the transaction from going through.  There were protests and appeals were made to the zoning commission in order to halt construction of a church.  Monsignor set out to have the zoning changed and 600 persons signed a petition to this effect.  (If you look up from the tire in this picture, you will find the current location of St. Sebastian.  To the mid-right of the photo is the proposed original location.  This picture was taken by Fr. Allan Corrigan.)

More land was located in the Elmdale Estates property in a triangle of land between Mull Avenue, Hawkins Street and Elmdale Avenue.  The land in the area, consisting of lots of open fields, was as of yet relatively undeveloped and in some places swampy.  It is reported that in the  early 1920s the Klu Klux Klan held late night rallies and cross burnings in these fields.  Directly across from the Mull Avenue property was a wooded area known as Elm Hill Park.  At one time there was a cabin that sat on the shore of a pond on this property that Author Marks, the original owner of Elm Court, used for hunting.  The pending sale on Delia and the possibility of zoning changes drove down the price on this property.  So on February 10th, 1929 the 8 acre property on Mull Avenue was purchased along with a bit of swampy land across South Hawkins Avenue in hopes that a future high school might be constructed there. 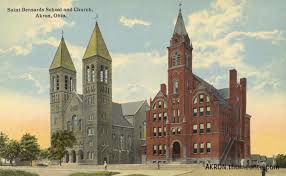 It was at this time that Father Zwisler’s childhood companion became part of the history of the new parish.  While Father Zwisler’s life path led him to the preisthood, his friend from St. Bernard Parish School, Robert Kraus, went on to become an architect eventually opening his own architectural firm in Akron.  The new pastor contracted the services of Kraus and Helkamp to begin plans for the new parish.  Kraus and Helkamp had already developed a reputation for building fine Catholic structures. Now they designed a combination church, school, convent, and recreation hall for the newest parish in Akron.  As they worked on the plans the firm was kind enough to offer Father Zwisler office space in their place of business from which he might manage the parish.  The offices were a short walk from St. Vincent Parish on West Market Street and as the of the architect, Robert Kraus Jr., said, “We were planning the new parish practically in the shadow of the bellower of the church!”

In short order the plans for the new building were finished and approved by the bishop.  The blue prints were hung up at all the exits of the Rankin School Auditorium so parishioners could have a look at what their future church would look like. 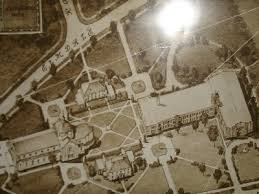 A shrewd man, Fr. Zwilser put out for bids for the building.  He hired the lowest bidder and then hired the second lowest bidder to keep an eye on the lowest.  If they did not like the arrangement he was content to go with the second lowest bidder and then hire the next bidder up to keep an eye on them.  Apparently C. W. & P. Construction found the terms acceptable and a ground breaking date was announced for April 28th.  The Most Rev. James A. McFaddedn, then auxiliary bishop of Cleveland, laid the cornerstone after a delay because of a severe rain storm.
Posted by Fr. V at 8:14:00 AM