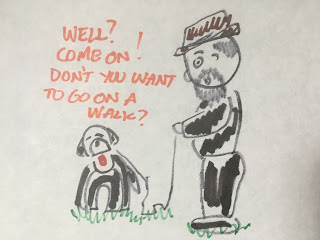 Sebastian (the dog) has been slowing down.  Time was, when we went for a walk, he dragged me through the neighborhood.  As the years passed, his position went from pulling me, to just being ahead of me, to at my side and, more recently and sadly, being far behind me.  Such is old age.

As the heat of summer kicked in things got a little worse.  When we go outside sometimes he is just content to sit in the sun soaking in the rays.  This is highly unusual for this dog.

We went to the vet last week and discovered that he had a few issues not the least of which was arthritis.  The doctor prescribed some pills.  Apparently the work.

This weekend we had a couple of missionaries staying at St. Sebastian.  They called on my cell phone in order to tell me that they were going to be late.  The priest on the line had a thick accent and with my decreasing hearing ability (apparently Sebastian and I are suffering from similar fates) I found it difficult to understand what he was trying to say.  Knowing Sebastian was keen on just laying in the sun in our yard, I let him off of the leash in order to pay more attention to the phone.  And then the murders began. 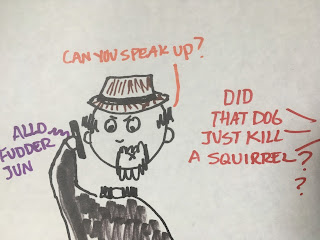 I heard a woman call out.  Pandemonium ensued.  Sebastian hasn't so much as looked at a squirrel in a couple of years and now he chased one down and caught it!!!  Phone in hand, I tried to explain to the priest why I needed to stop talking to them and with other hand I tried to both bring the dog/squirrel battle to an end AND signal to the people walking down the walk that all was under control.

Leashing the dog with the now deceased remains, I had to face the lady and the gentleman and wait for the reprimand for allowing my dog to take down and innocent squirrel.  So I turned to them. 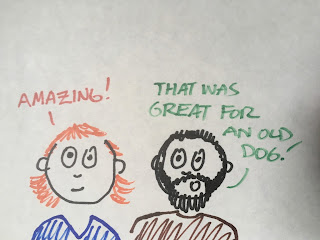 Okay.  That was a freebee.


Of course there was still the problem of having the dog with a squirrel in his mouth.  He was SO proud, prancing and showing off his prize.  We couldn't go in the house - not with the squirrel in his mouth.  So we tried to sneak around until he burried it somewhere.  Of course we ran into someone else who said, "Look how cute!  That almost looks like a real squirrel!"

What do you know?  Two freebees in one day.

Finally he buried it under a bush.  (I'll deal with that some other day.)  But - wow - life through pharmaceuticals.  It seems I have a brand new dog. 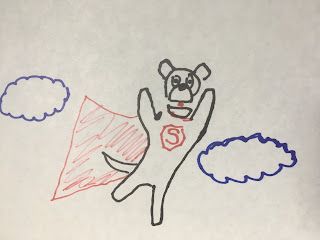 Oh my, good thing that I hadn't just taken a drink of coffee before I read this or my computer would have been soaked. My almost 5 year old goldendoodle Reese is queen of chasing squirrels in our back yard. In fact I've got a patch of muddy skid marks by the fence to prove it. Our squirrels are VERY talkative from high in the tree as she stares them down. She has not caught any yet, although close a few times. Maybe she needs lessons from Sebastian!!

Haha! Oh that's the best! Good for Sebastian! It is wonderful when you fund something to help the older dogs feel better.

As president of the Akron Society for the Prevention of Cruelty to Squirrels and other Rodents, (A.S.P.C.S.R) I am shocked and appalled.
What would St. Francis of Assisi say? That harmless little squirrel had a mommy and a daddy or maybe a nest of little baby squirrels at home, waiting for breakfast. Oh the humanity of it all.

I suggest you make a $100.00 contribution to the A.S.P.C.S.R as soon as possible to save your soul from squirrel HELL!. Take a fresh never circulated one hundred dollar bill. Roll the bill into a tight roll and bury it 2" deep under an oak tree. They'll find it.

Stephen! Is that you? You leave that good priest alone! He is far too busy to do burry money, and the resources of St. Sebastian are better used elsewhere!
Fr. Louis Thomas

Go Sebastian! Squirrels are just rats with good pr and need to be obliterated.

What a great description! And I am so glad Sebastian is feeling better.

I am happy that Sebastian is feeling better and showing some primal instincts while making others laugh! I think of the relationship we have with our dog partners as part of a great and beautiful risk. We love so intensely, share a reciprocal relationship, and we also observe their aging faces and temperaments. It's a short,intentional,and most fulfilling relationship that we could not avert, as a chosen dog owner.

I read that Sebastian is being treated with pharmaceuticals for his arthritis. I, too, believe in the research backed pharma treatments. My story is personal and I feel pertinent to Sebastian's because of his age. My beautiful and rather medium to large (okay,large) Solomon was prescribed Rimadyl for his arthritic hips. After a few weeks, he began to feel sick, was diagnosed with liver disease (he had his liver tested previous to Rimadyl and it was fine). His health declined rather quickly to the point of where I was giving him subcutaneous fluid therapy at home. I felt Solomon's soul rise to heaven while I comforted him at his amazing age of 14.

I do not know what pharmaceutical Sebastian is taking for his arthritis. However, please be cautious, INSIST on having Sebastian's liver tested OFTEN. I am ascertained that SOME dogs' livers may not be able to process such a drug just based on their age number and age of their "processing parts".

Thank you for reading and I wish you and Sebastian the best.

Nice to hear that pain meds are helping Sebastian. I think he is a great dog. You've never seen problems until those nasty rat squirrels chew apart electrical wires and cause a fire in the home.

It should comfort you to know that I regularly cull the herd of rat squirrels in my neighborhood. I've gathered many a squirrel pelt with my pellet gun. One shot, one kill...

Dear Fr. V.,
Don't feel so bad! I agree with some of the other posters.... squirrels can be a nuisance and destroy property that is expensive to replace! Same thing with raccoons & groundhogs. People think they are so cute & cuddly! They have never been on the receiving end of some property damage.

I think our society has to get a real grip on wild life. Just because they're cute..... doesn't mean they are not a nuisance to gardens & other structures.