Here is the second installment.  If you have any corrections/additions, I would be most grateful. 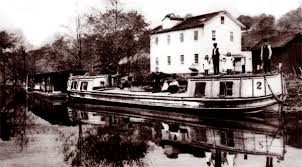 Due to the construction of the Ohio Erie Canal which was completed in the early 1830s, Akron became a boom town growing by leaps and bounds.  As the city of Akron grew, so did the number of Catholics and St. Vincent, the mother church of Akron, gave birth to a number of daughter parishes mostly to its east and south.  St. Bernard parish was the first in a line of parishes.  It was organized in 1861.  At their first meeting they raised $2.75.  So a request for a donation was made to King Louis of Bavaria since most of those in the new parish were from his nation.  He responded with a gift of $500 and from there the history of that parish took off. 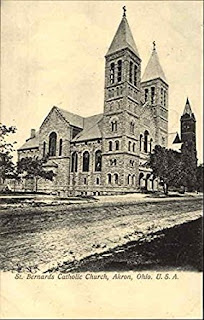 St. Mary Parish was founded next.  It began its existence as a mission parish of St. Vincent in 1887 by The Rev. Dr. T. F. Mahar. 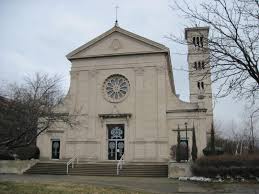 That same year the County of Summit constructed an infirmary near the intersection of West Exchange and Rose Boulevard, currently the heart of St. Sebastian Parish.  This area was largely un-peopled.  Though the city of Akron was considered a bustling city, what would later be the St. Sebastian area was still far out in the country. 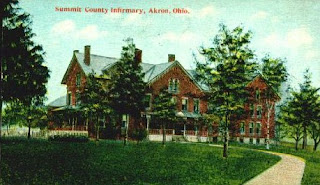 The infirmary was a place for people with no means, family or friends.  The sick, the elderly, the abandoned, those addicted to alcohol and the like found a home at the infirmary.  Not that life was easy.  It was also a large working farm and those who lived there had to work hard.  Death was a regular visitor and so the infirmary had its own potter’s field.  In the area where Schneider Park is now located (one block east of the current church) there are reports that the city asked contractors to be on the lookout for human remains when doing work on the park as late as September 9th, 2009.  Though there was no report of having found anything (the cemetery was presumably removed at county expense between  the years 1912 and 1916) if one looks at arial images of the park, green rectangles the size of graves in perfect rows can be seen in the northwest section of the park.

In the summer of 2017, the city of Akron and the University of Akron teamed up to investigate the possibility that graves were still present in the park.  For two weeks, university students researched, examined, and mapped the area.  In their early estimations, they surmised that there may be somewhere between 200 and 500 graves still in the park.  They found evidence of an old “cemetery trail” and of an old care taker’s shed.  It is also thought that the grave area may be larger than originally suspected.  All this evidence coincides with stories that Ralph Witt, who went to St. Sebastian Parish School when it opened, told.  He spoke of walking though the park on his way to school and he and his friends would occasionally find a bone sticking up through the ground. 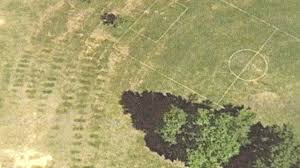 When the workers were asked if this project would include using imaging to see if the green rectangles still contained human remains (as opposed to really good back fill that just produced good patches of grass) the workers responded that the ground had too much clay in it to make taking such images possible.  Eventually someone will have to take shovel to dirt to make absolutely certain.

On a similar note, according to R. J. Brownfield there is a small hill in Hardesty Park, a park located a few blocks north and west of the parish.  This is reported to be an Indian burial mound.

The information on Schneider Park is subject to change and soon!  There is a town hall meeting coming up at which they will report their findings.  There is also the possibility that they will return to do more work after discovering that the scope of the project was larger than originally anticipated.
Posted by Fr. V at 6:38:00 AM

Father, thank you so much for this series about St. Seb's and the history of the Church in Akron. I am learning so much!

I would like to add that St. Bernard is one of the few Catholic churches anywhere that was paid for in full before the first Mass was celebrated there. This is due to the generous, industrious German, Austrian, and Alsatian parishioners who worked hard and sacrificed for their parish home, the King of Bavaria, and the leadership of Fr. Broun, who was pastor for over 50 years. They not only saved their pennies, they donated their artistic talents and hard labor.

Our beautiful altar rail, which stretched all the way across the sanctuary and was beautifully carved of marble to match the high altar, was paid for by the parish school children, who literally saved their pennies and nickels for years. Most of it was dismantled over 50 years ago, but there is a small part of it still there, moved to the bottom of the sanctuary steps. We are fortunate that the renovations of the 60s were very gently carried out at St. Bernard.

There used to be a life-sized statue of St. Michael hovering over the main vestibule with a sword in his hand and a grim look on his face. I can remember as a very small child asking my father about him, since he looked a little scary. He told me St. Michael was looking for people who came in late to Mass, or who left early - and I believed him!

At the time the present church was completed in 1905, there was some thought given to creating a Diocese here in Akron because it was then the fastest growing city in America then. St. Bernard would have been the cathedral, which is one of the reasons it was built on such a grand scale.

Thanks again for this series, Father. I know we are there to worship God. But our parish homes mean a lot to us in the pews, and we love them.