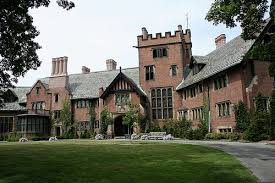 This will conclude the prehistory.  Next week we begin with the founding of the parish.

The houses being built west of St. Vincent were largely for middle class and wealthier people of Akron owing to the fact that the stench, from the factories that brought people to the area in the first place, tended to be carried east by the winds.  Some notable residences within the current parish boundaries include Stan Hywet Hall built between the years 1912 and 1915 by the Siberling Family and  Elm Court, the estate of Arthur Hudson Marks built in 1912, which is just a few blocks from the church.

As the city extended westward so did the need for Catholic institutions.  In 1923 the Akron Dominican Sisters purchased Elm Court to become their provincial house.  It was dedicated on October 14th, 1923 and the very next day the sisters opened an academy for elementary and high school girls. 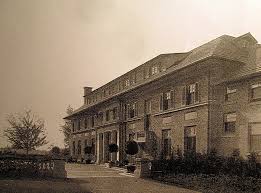 As of yet however, there were no parishes west of Saint Vincent.  But then on July 1st, 1928, (this was the same year the first regular television programming is broadcasted and at the Democratic National Convention in Houston, New York Governor Alfred E. Smith becomes the first Catholic nominated by a major political party for President of the United States) a letter was sent to The Rev. Hilary Zwisler, at the time pastor of St. Barbara Parish in Massillon, from Bishop Joseph Schrembs, informing him that the Diocese of Cleveland was establishing a new parish in the West Hill area of Akron and that he was to be the man to carry the project out.
Posted by Fr. V at 7:45:00 AM