FRIDAY POTPOURRI: PAUSE BEFORE THE PAWS

Another cross often constructed along 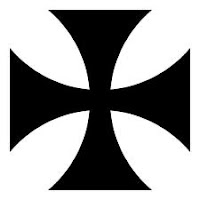 the same lines as the Greek cross but not necessarily so is the cross pattee - as it is known in heraldic circles though when connected with Christianity if usually referred to as the Maltese Cross, Crusader’s Cross or Cross of Saint John. In essence this cross simply means that the arms of the cross are thicker at the end than they are at the center and that can be accomplished in many different ways. “Pattee” is from the French meaning “paw,” the paws or ends of the cross splaying outward like a paw.

The cross is often associated with the Crusades usually appearing red on a white background though it was never named as the official cross, any number of

crosses being employed by the Crusaders.

If you want to know if a book, such as a book on theology or a Bible, is consistent with Catholic teaching, you might turn to one of the title pages to see if it has been granted in imprim

atur (let it be printed). This cross precedes the bishop’s name that has the book reviewed and given permission for it to be printed with the Church’s official approval. This cross is also often employed to mark Christian sites on a map.

Sadly, imprimaturs these days are only as good as the bishop in whose diocese they are obtained.

Richard McBrien's Catholicism was granted an imprimatur for a time, long enough for copies to be circulated in many seminaries.