FRIDAY POTPOURRI: HEAD OVER HEALS IN LOVE WITH JESUS 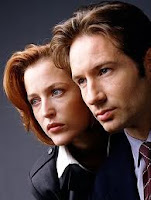 religiously hoping against all hope that it was actually leading somewhere) when Mulder and Dana came across a building covered in crosses that were all upside down. They assumed, wrongly they would soon discover, that the place had been inhabited by Satanists. Not a poor assumption since this cross is sometimes known as Satan’s cross. Though it is occasionally used by Satanists to mock Christian belief owing to it pointing downward to he

ll it is, as the website seiyaku put it, a bit of a misnomer since “’Hell is not is not physically ‘down’ any more than heaven is ‘up.’ And secondly, Satan was not crucified. That would be crucifiction.” (I thought that was clever.)

What Mulder and Dana actually encountered was a

Christian cult dedicated to Saint Peter. As you may recall, Saint Peter, though condemned to be crucified, considered himself unworthy to die in the same fashion as Our Savior. So by his request he was crucified upside down, his arms stretch out near the ground and his feet faste 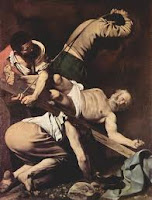 ned to the cross above. This cross then symbolizes to us the martyrdom of St. Peter and his “incredible display of humility.”
Posted by Fr. V at 7:02:00 AM

This morning I awoke thinking about St. Andrew (not sure why).

Father, since you have posted about his brother, Peter, is St. Andrew's "X"-shaped cross part of Christian symbolism?

Why did you put "incredible display of humility" in quotes?

I didn;t make it clear but it was because I was quoting the other website again. Sorry.

Pat - I think that will be next week!

I've never understood why the upside down aspect showed humility - seems like it's actually MORE torturous. Like saintly one-up-manship. :) I take it on faith that it was humble, but it still always makes me chuckle when I hear that.