HOME FROM THE HOLY LAND!

Late last night I returned from our 90th Anniversary Pilgrimage to the Holy Land.  I won't share with you all of my (hundreds) of photos - but here are a couple of things that really moved me.  I was surprised by what they were - not at all what I expected.  And there is plenty to be awed by.  After a while it makes you head spin.

We visited many, many, (MANY) churches.  But one of the things that really got me was this boat.  It is approximately 2,000 years old.  It was at least around near or at Jesus' time.  (It is impossible to say whether it was connected to Him at all.)  When Scripture talks about fishing or that Jesus was in a boat, they were talking about vessels just like this one.  It made concrete what I could only imagine before. 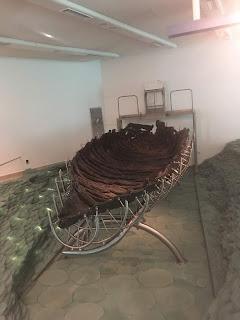 The place that nearly moved me to tears was the church of the Primacy of Peter.  This is the place where Peter told Jesus three times that he loved Him after denying Him three times.  I read that Gospel during the Mass and got quite choked up (and that says a lot coming from me) and worked hard at holding it in. 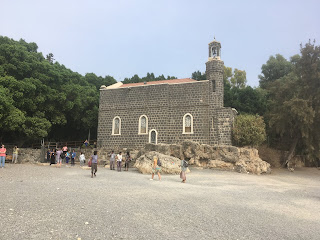 This is the mosaic behind the alter where we had Mass.  There is Jesus and Peter but anachronistically there is Pope Paul VI laying on the rock where all of this took place.  It is said that, after praying and reading the Scriptures about Christ signifying the primacy of Peter, he opened up his arms and in great emotion, fell on the rock and embraced it.  Maybe that was a little of what I was feeling. 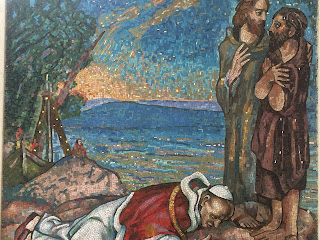 So we were at the Church of the nativity.  I saw this Orthodox priest and nudged Fr. Orndorf (who was with us) and said, "Say, doesn't that chap look like  . . . " and he broke in and said, "Fr. Klonowski!"  At least when Fr K is in full beard. 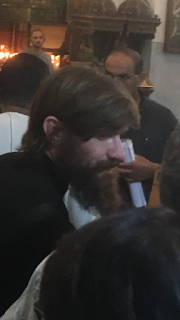 The Wailing Wall was an unexpected moment of grace.  It was far more moving that I expected.  Maybe there will be a homily on this some day soon although I will say this one thing: the white, plastic porch chairs kind of threw off the aesthetic. 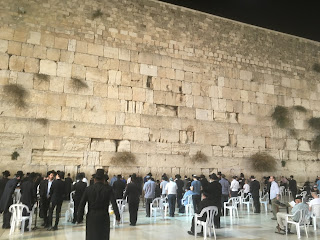 These next two pictures are in the Bible that I've had for ever.  They were in black and white and it was stunning to see them in color.  In my Bible there are very few people around these structures save for some nuns which did not help prepare me for the crazy crowds there were everywhere. 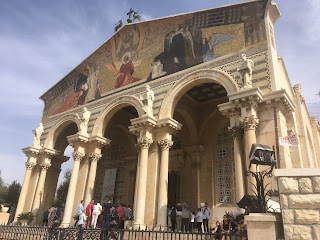 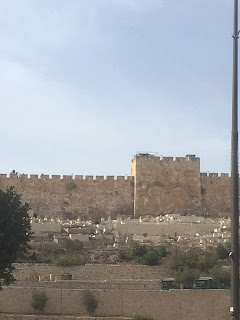 This is me doing my best imitation of the Dome of the Rock.  Can you tell which is which? 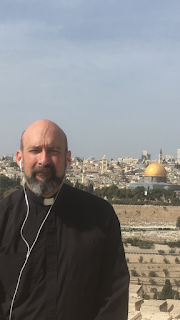 Reciting our baptismal promises and going into the River Jordan where Christ was baptized by John helped with visualizing that story. 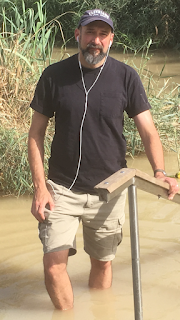 But always, always, alway it was celebrating Mass (here or in the Holy Land) that put us closer to Christ who is always present so fully - more so than He is in a place He happened to be 2,000 years ago. 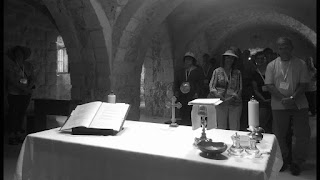