Me thinking about cars when I was little and trying to impress Mom with what I thought was cool: 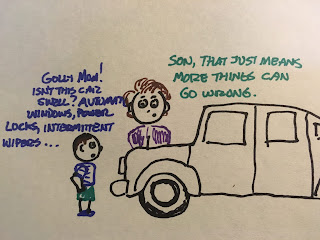 She liked things simple.  The more complicated they got the more complicated (not to mention expensive) things became when those things stopped functioning properly.  I think that is why I like mechanical clocks so much.  You can always oil them or something and get them running again.  Other clocks are throw away clocks - once they stop working it is too expensive to bother getting them fixed.

SOOOO we move on to the NEW sound system at St. Sebastian.  It promised to clean up all of our problems and, I will admit, when it works, which has been most days except Sunday, it is pretty great.  The problem is that the sound guys come in on Friday to make changes and that means we don't really get to try it out until Sunday Masses.  So last week this happened: 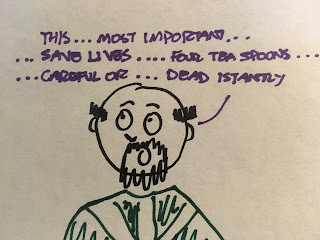 Needless to say I was not a happy camper.  THIS WEEK everything was supposed to be fixed (with some minor tuning yet to come for those hard to hear areas.)  Then we had a power surge on Sunday morning and our fancy shmancy computers all went rogue.  The air conditioning went down because the programming was lost and the sound went out because the system lost its brain.  There was nothing we could do - no switches to touch - no slides to slide - no buttons to punch - NOTHING AT LEAST TO KICK!

Finally half way through the Mass I just unplugged the (darn) thing and plugged it back in.  It kind of worked then but the computer screen was all wacky (all wacky?) and we could not make any adjustments or turn things on and off. 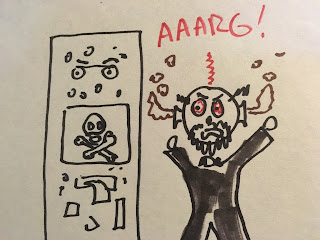 Ah!  The wisdom and cleverness of Mom.  I may not have fully appreciated it back then but how could I have ever doubted? 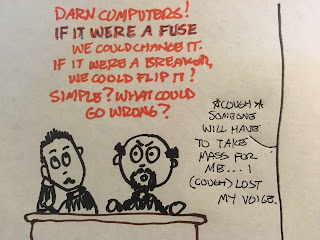 Father - you have my complete sympathy.

A few weeks ago, my husband and I had our whole-house air conditioning replaced. For 20 years previously, when we needed to cool the house down, we simply clicked the thermostat to AC "on" and selected a temperature. When we wanted to shut it off, we selected "off". Which was perfectly fine for non-computer literate, nerdy people like us.

We were assured by the technician we were getting a top-class, state of the art system in replacement. Now, it has all kinds of pre-sets to consider, such as a temp when the house is empty, at night, and during the day.

After studying the manual over and over, I still cannot figure out how to simply turn it off when it is a pleasant day and I want to open the windows. All I can figure out is to turn the temperature up to 80 and shut the windows if the system clicks on!

When I read of your problem with the sound system, I was reminded of a pastor from my childhood. Fr. Liam Kitt was from Ireland, and he apparently was educated in the days before microphones. He was a kind, holy, beloved priest, but he absolutely bellowed his homilies at Annunciation! Anyone who didn't know any better would think he was a fire-and-brimstone kind of clergyman!

I must say, though, that St. Sebastian Church is very handsome indeed these days. I haven't been inside (not a parishioner), but the coat of arms is noble and shining, and the front plaza is very welcoming and beautiful.

God bless you and Fr. Simone and everyone at St. Sebastian! Sue, OFS

Fr V - just be patient and remember everything mechanical, computers, sound systems, etc., is fixable. It will all work out! Kim M.