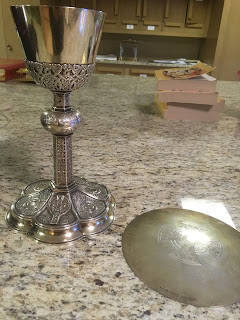 This past week this chalice was given to St. Sebastian Parish.  A phone call from the grand nephew of our founding pastor, Monsignor Hilary Zwisler, called to say that the family had this chalice in their possession and now wished to reunite it with the parish.

The chalice was donated to the parish in 1929 by Cletus G. Roetzel.  Mr. Roetzel was a lawyer in Akron and was a decorated Knight in the Order of St. Gregory the Great by Pope Pius XII, 1949. He served with Field Artillery of the United States Army in World War I, was a member of the American, Ohio and Akron (past president) bar associations, Akron Law library association, Catholic Service League (trustee, past president), American Legion, Izaak Walton League and a Phi Delta Theta.

The chalice, with its Celtic cross, has this inscribed around the bottom of the base; “DONATED TO ST. SEBASTIAN CHURCH BY CLETUS G. ROETZEL IN HONOR OF HIS PARENTS JOHN T AND MARY ROETZEL CHRISTMAS 1929.”

The grandnephew, Mr. Bernard George, had no idea that the parish was about to celebrate it’s 90th anniversary when he called about giving the chalice to the parish, but it made the timing so much more special.  I assured him that we would give the grand piece a mighty shining up and use it in a special way this coming year. 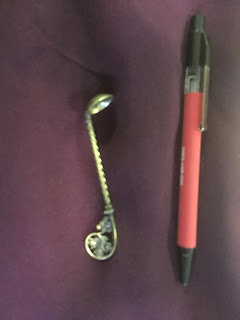 Interestingly enough it came with this other little utensil pictured here with a common writing pen next to it in order to give you an idea of scale.  (Try guessing what it is before going on!)  I have never seen nor heard of such a thing before.  It seemed (to us) obviously liturgical (notice the grape and leave design on the handle) and we spent some time trying to figure out what it was.

There were a number of guesses of things with which we were somewhat familiar; items from Eastern Rite Catholics or possibly for adding salt to holy water for the old order of blessing but none of these seemed quite right.  (Why grapes if it for salt and water?)  Finally, the every handy internet came to the rescue and named a liturgical utensil of which I never heard (not an easy thing to do.)  It is called a scrupulosity spoon.  For the priest who was worried about adding too much water to the wine at Mass and thereby making it invalid, or if he had difficulties with alcohol and used very little wine and wanted to make sure that he mixed in just a very small drop of water, he could stick this tiny ladle into the water cruet and abstract that perfect amount of water.

God works in mysterious ways. I hope you enjoy having the returned chalice and newly discovered scruple spoon!May God grant you and your parish many happy years.

Thanks and God bless you!